The Sentence - Running Away From Police 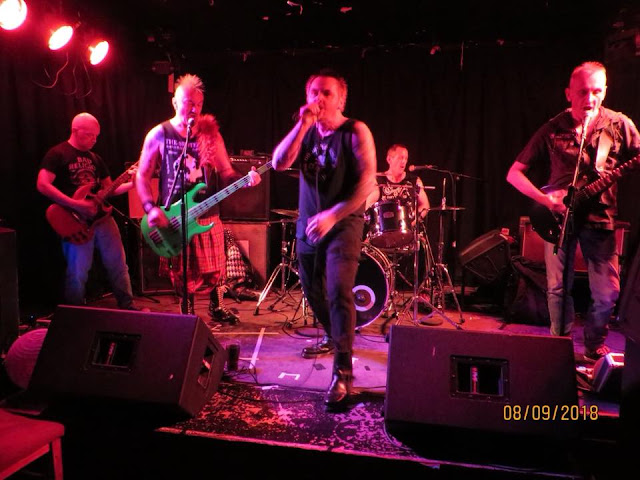 Back in July I posted a guest review from No Agenda frontman Stef Holden in which he introduced us to new Lancaster band The Sentence and waxed lyrical about their very promising first song Bored Teenager (https://justsomepunksongs.blogspot.com/2018/07/the-sentence-boredteenager-guest-review.html). Yesterday my letterbox rattled and it was the postman delivering a slim package which turned out to be the band's impressive debut 7 track cd (cheers guys) and I'll be sharing a track from it today.

The band are a 5 piece featuring Spike (bass), Ged (drums), Steve (guitar), Watty (vocals) and Andy (guitar). They call themselves an alternative d.i.y. punk band, to me they conjure up memories of the early 80's bringing to mind the kind of superior fare that Bristol label Riot City Records would have helped achieve a place in the indie charts. The cd is titled Strong Arm Of The Law and the cover  dredges up recollections of some of the classic sleeves from that era. I could imagine the 4 Skins, The Partisans or maybe the Upstarts singing their anti police classics and not being a million miles away from the song you'll find below. I said back in the summer I was looking forward to hearing more from The Sentence and they haven't disappointed.

The songs on the cd take aim at the usual deserving targets, lying politicians, war, modern society, dysfunctional families etc. You can get it direct from the band : https://www.facebook.com/northwestpunkband/

They're not reinventing the wheel, there's no bells and whistles, just good old fashioned punk rock like they used to do back in the day. It's good stuff that will go down well with old timers lke myself and with scene newcomers. This song is called Running Away From Police...

Email ThisBlogThis!Share to TwitterShare to FacebookShare to Pinterest
Labels: 2018, punk, The Sentence