London Bullet - No Surrender No Retreat (Review By Dirk Ceustermans) 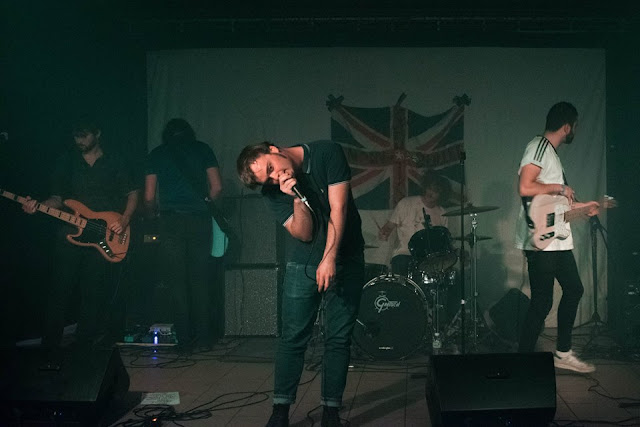 Another review today of a band from his native Belgium by Dirk Ceustermans (aka Zaphod Beeblebrox). The band is called London Bullet and you can get more info on them here : https://www.facebook.com/LB9800/

For their music go here : https://londonbullet.bandcamp.com/


I got this executive manager here down the office the other day. With an enthusiastic smile on his face he walked over towards my desk.
I knew this was not going to be a conversation about work, as I remembered he used to hang around the Piekerniet, a Youth Centre/pub in a small town called Deinze way back in the early 80s. He knows a couple old folk that I still see around too.
"Dirk, check this CD out, a mate of mine gave it me, his son's playing in this band"
"Mmm right, ok, cheers bud!". After another few hours of boring work, I get to the car and slip in the cd.
Crickey!
This is GREAT!

A new release (October 2018) from these boys from Ghent, called "Secrets from the Sewer" spewing out well crafted songs and clearly inspired by UK's 80 and 70's punk heroes but without being to much of a rip off band in that sense, I realised I was home without having paid any attention on the road at all.

Fastforward 3 weeks, I learnt not much more except that these kids have been busy for 8 years, are based in Ghent, although some are still from that town Deinze I guess and have been putting stuff on Bandcamp since 2011! It is funny that certain bands keep under the radar, but hey! there's so many bands around here nowadays that it happens.

Going through their works it is clear that this band evolved from good (really good at moments) to great, (really excellent in fact!)
Completely Zaphod approved!!!

No Surrender, No Retreat - the track I picked out for you is so amazing, you hear the UK82 influences boiling over, a very well crafted pièce d'art delivered in a top class production.
Ah yes, I see why:
The songs were recorded at Studio 195, owned by old chum Patrick Delabie. He can do magic!! He used to be in a band called the Scoundrels in the 80's, releasing 2 neat little LP's...
Plenty of superb productions he did for many Belgian bands.
Back to this track, if it were released in 1982, by a UK band this would be an immortal punk classic. But these little belgians can only hope for a little recognition in the era of digital overkill of punk music worldwide.

London Bullet's deffo a band I will look out for to see live, in the meantime, enjoy their stuff on Bandcamp, tell us what YOU think of it, I say...
Lil' Belgium's got talent!

NO SURRENDER NO RETREAT :
RUNNING DOWN THE STREETS
- yeah we're running down the streets
- we're out here dressed in black
- waiting for it to kick off
- yeah this city's under siege

tonight the streets are ours
this city's under siege

NO SURRENDER NO RETREAT
from Secrets Of The Sewer, released October 11, 2018