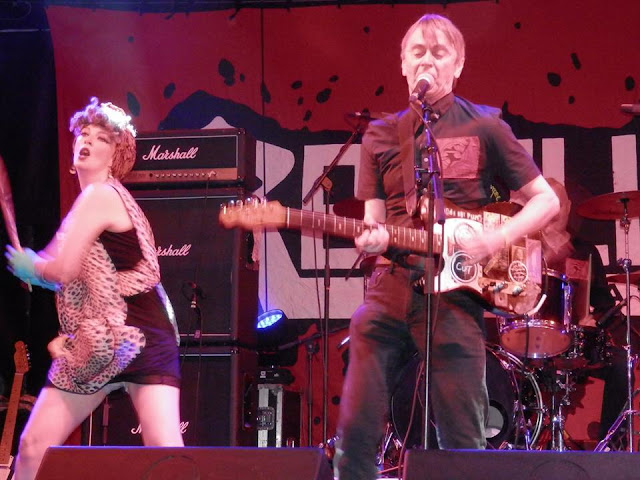 After yesterday's song by Liverpool kitchencore band Pete Bentham And The Dinner Ladies, today you're getting a Top 10 chosen by frontman Pete Bentham. Many thanks Pete, over to you...

The arrival of Punk Rock to me was kids remembering what rock & roll was supposed to be about - No need to have lots of technical ability, have fun making your own rules - freedom to be who you want and do what you want, after the dreary corporate prog rock era. Therefore to me things that come before the punk explosion of 76/77 but share those values, count as punk. Probably the people who see punk as a uniform will disagree, but I won't join you down the Conservative Club thanks. So this is my top ten punk tunes (This week anyway)...

Louie Louie - The Kingsmen (1963)
There's been a thousand covers of this including Motorhead, Toots & the Maytals and Iggy Pop, but this is the original hit. The Kingsmen were a garage band who made this cover of a 1955 R&B song for just $50. Considered subversive at the time, the lyrics investigated by the FBI. How many punk tunes took from this riff? Clash City Rockers. A Bomb in Wardour Street etc..

Lucifer Sam - Syd's Pink Floyd (1967)
Syd Barrett led the psychedelic pioneers for just one album before succumbing to personality disorders, made worse by his acid intake, which left the rest of the band free to become prog giants and the epitome of everything detested by punks. But the early recordings with Syd are a big influence on many of us interested in the more exerimental end of punk who think that Syd was maybe more punk than Sid.

Roadrunner - Modern Lovers (1976)
Like Syd Barrett, Jonathan Richman has a very simple child-like quality in his writing which is very inspirational. It was hearing him that made me realise it's OK to write about anything you like...Cats & Dogs, Lorry Drivers or whatever. The seminal album was recorded with John Cale from the Velvets in 1972 but not considered fit for human consumption in the era of concept albums and stadium rock. When it was finally released in 1976, it was a major influence on all the main punk players.

New Rose - The Damned (1976)
Released in October 1976, this is considered to be the first ever British punk single. Like a lot of frustrated kids at the time, in the pre-punk era, they were into the proto-punk bands like the MC5, New York Dolls and The Stooges and you can really hear those influences. This was recorded in a tiny 8 track studio by Nick Lowe, who perfectly captured their raw sound. In my opinion, their debut album is one of the wildest and greatest rock & roll albums of any era.

Plastic Bag - X Ray Spex (1977)
Poly Styrene is the ultimate punk hero for me. She is one of those people like Joey Ramone and Ian Dury, who would never have been a pop star if it wasn't for punk's all inclusive DIY attitude. She had the whole visual concept and everything totally worked out and her lyrics were way head of her time, with songs about consumerism, celebrity culture etc, that are just as relevant today. Probably why the Dinner Ladies have a sax player.

Rebel Girl - Bikini Kill (1993)
Kathleen Hanna and the rest of the Riot Grrrl movement were really carrying the torch on from bands like X Ray Spex, The Slits etc. That movement really had a massive, positive influence on the DIY punk scene as a whole and some of my favourite bands now have the same attitude and sound, such as Bratakus, Ill, Piss Kitti, The Twistettes.

Touch Sensitive - The Fall (1999)
I know a lot of people are totally baffled by the appeal of The Fall, whereas the band can easily become an obsession for those of us that 'get it'. I think that people are disappointed by them because they are expecting a rock band in the traditional sense. But that's the opposite of what he was trying to do. His influences were krautrock and 60s garage bands like The Monks so the power of the band comes from the repetitive nature of the music and his unique lyrics that came from a mind that just looked at the world differently to anybody elses. A proper genius.

Twistettes - Suck It, Fake It (2016)
There are so many great bands around at the moment and these are one of my favourites. Two girls from Glasgow on just drums and bass, with a dead raw stripped back sound, singing about stuff they believe in. What's not to like? I'm old enough to have been around pretty early in the punk era but I'm honestly not arsed about looking back. There are too many good bands now to go and see.

Am I Invisible Yet? - Interrobang!? (2018)
We played just before these at Another Winter of Discontent festival and we were all mesmerised by their songs and the performance. It proves you can be a punk band and still do something interesting and intelligent. Probably my favourite band at the moment and we are now mates with them after putting them on in Liverpool, which is obviously one of the great things about the punk scene in general.

Email ThisBlogThis!Share to TwitterShare to FacebookShare to Pinterest
Labels: Pete Bentham And The Dinner Ladies, Top 10