Surgery Without Research - Thugs In Blue 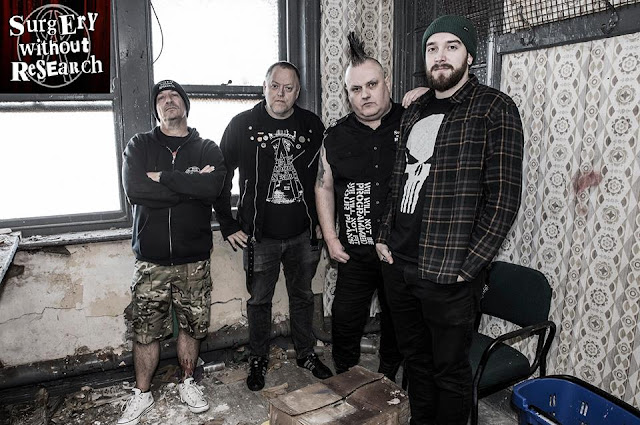 A couple of week's ago on the show (https://www.mixcloud.com/mick-fletcher/just-some-punk-songs-271118/) I played a song from the new Surgery Without Research ep called Fight and it led Wayne Elliott to comment "I thought you'd play something by them."  I guess that means they're a Just Some Punk Songs kinda band so it's about time they were featured on the blog.

From Kent, they formed in 2000, are influenced by the UK'82 English punk  scene and currently line up with Andy H (vocals/guitar), Mark Spooner (guitar), Dave Booker (bass) and Nathan Antino (drums). Being honest, they've flown under my radar till recently and a look at Bandcamp suggests I've a hell of a lot of catching up to do :

According to their post on Facebook, the new 4 track ep, Thugs In Blue, will be available in black/blue vinyl on 15th December from Urinal Vinyl and Research And Destroy. It's limited to 250 copies so don't hang around. Details :  https://www.facebook.com/surgerywithoutresearch/ You can find the digital version here : https://surgerywithoutresearch.bandcamp.com/album/thugs-in-blue

As well as the expected (top notch anarcho protestation) there's also the unexpected (a cracking cover of the theme tune to classic kids tv show The Flashing Blade). This is the title track and given some of the imagery currently showing up on our tv screens it's unfortunately all too topical, it's called Thugs In Blue...

Email ThisBlogThis!Share to TwitterShare to FacebookShare to Pinterest
Labels: 2018, punk, Surgery Without Research