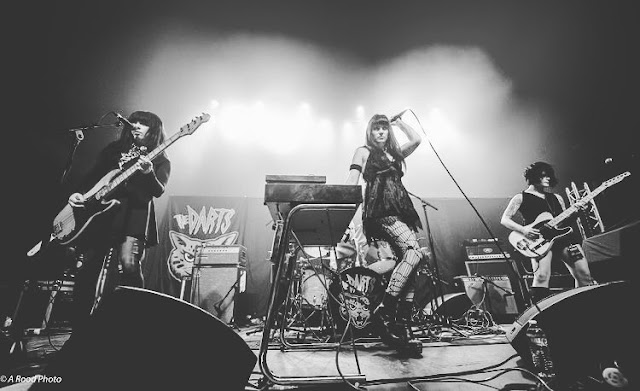 Christmas Songs. They're crap right? Generally I run a mile when someone even mentions them. But like with pretty much everything, there are exceptions to the rule. I'm posting one of those exceptions today.

The Darts are a garage-psych-rock band from Phoenix, Arizona, who's Me.Ow. album caught my attention last year and who's Subsonic Dream/Bullet single from earlier this year was pretty damn impressive too. They also rereleased their 2016 Self Titled debut album. You can check out their music here : https://thedartsus.bandcamp.com/

The line up of the band is Nicole Laurenne (organ/vocals), Christina Nunez (bass/vocals), Rikki Styxx (drums/vocals) and Meliza Jackson (guitars/vocals).  They've a new album in the pipeline, their 3rd, it's been recorded and is having the finishing touches applied (keep up to date on it's progress :  https://www.facebook.com/thedartsUS/) but one song which won't feature on it is the track they've contributed to the Something Shocking From The Stocking! ompilation. Rather oddly, despite it being a Christmas song, it's one of my favourites from them thus far. You can check out the comp here :  https://somethingshockingfromthestocking.bandcamp.com/album/something-shocking-from-the-stocking

A sub 2 minute rock n roll romp, this is an infectious cover of a song by Wild Billy Childish And The Musicians Of The British Empire (it was on the Christmas 1979 album and you can hear it here :  https://www.youtube.com/watch?v=0ypQpG6DJm0). It's called Mistletoe...

Email ThisBlogThis!Share to TwitterShare to FacebookShare to Pinterest
Labels: 2018, garage, The Darts