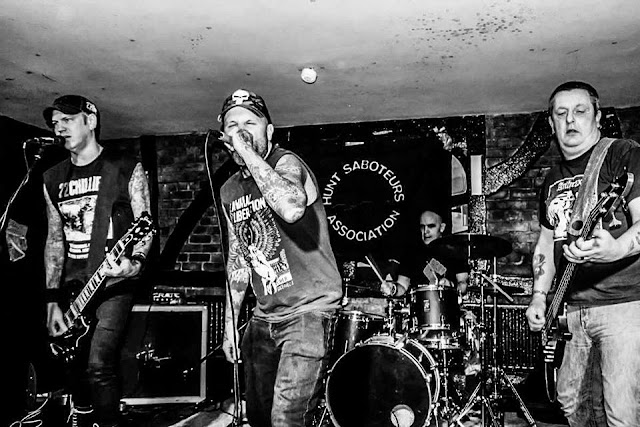 Active Slaughter are a hard hitting anarcho punk band from London who raise funds for "things that really matter." They believe in anti fascism, freedom for all, animal rights etc. They also believe in making one hell of a noise. They were active between 2001-2010 before calling it a day but got back together a couple of years ago.

Early 2019 will see them release their new album, Set The World Alight? Going off the evidence from the track they've teased us with it's going to be well worth watching out for. It'll be available on vinyl and digitally from Grow Your Own Records. If you check out the song at the bottom of this update and want to hear more ahead of the album's release you can check out several previous releases by them here :  https://activeslaughter.bandcamp.com/

You can get more info here : https://www.facebook.com/activeslaughter1/

The band's summation of this song is "fuck organised religion!" If you like your music with bite, this one's for you. It's called Without Mercy...

Verse 1 The greatest lie ever told. Religion is the evil in this world. Unlimited riches, influence and power. Growing in strength, the world they'll devour. Inquisition at your door Brainwashing you like you’re prisoner of war Blasphemy and lighting will strike They’ll hunt you down, put you your head on a spike. Chorus Oppression – Superstition Division – Control Illusion - Delusion Retribution – and war Verse 2 Living life by an ancient book. Made to control to have you hooked. I don't believe in your religion. A kingdom of heaven or what was written. You justify on blind faith, Dying for your god, a fucking waste, I see a coincidence, you see a sign, Brainwashed to kill for the holy divine