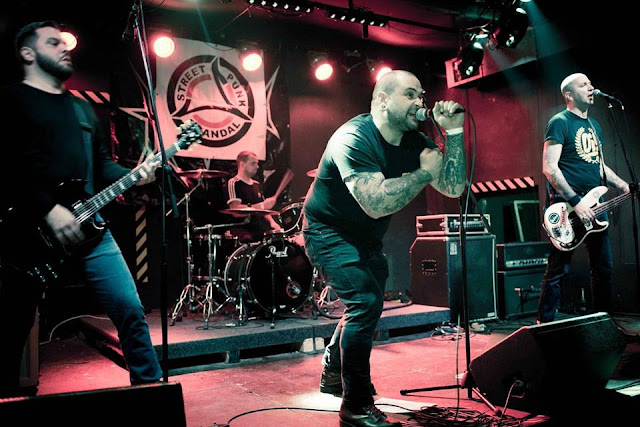 Another new single from Romania relocated to London street punks Scandal today. This time around they add a pinch of ska and reggae to the proceedings to cook up a very tasty concoction. The video you'll see below was filmed in Romania on their Payback Days tour last month.

The band are turning into one of the most prolific around when it comes to this kind of music, they featured on here recently with their Payback Days single ("one of their best songs yet"   https://justsomepunksongs.blogspot.com/2018/11/scandal-payback-day.html). Back in February they released impressive album On A Roll :  https://scandalstreetpunk.bandcamp.com/

2019 promises to be busy with plenty of touring, as well as gigs in Europe, including Germany, they'll also be playing the Undercover Festival at The Dome London (April) brfore July sees them at the Obscene Extreme Festival (Trutnov, Czech Republic) and the Exit Festival (Novi-Sad, Serbia). There'll be a new ep in the spring. You can get more details here :  https://www.facebook.com/scandalstreetpunk/

The new single is about growing older, having no regrets about your vices but realising that eventually things will have to change. Bittersweet but it'll get the audiences bouncing around and singing along. This is Broken Down Dreams. It's the sound of a band at the top of their game.

I WAKE UP IN THE MORNING, I HAVE TO GO TO WORK SKA TUNE IN MY EARS, I MIX MY COFFEE WITH RUM ON MY WAY TO THE WORKSITE, TEN FAGS AT LEAST PUNK ROCK IN MY HEAD, I’LL DRINK A COUPLE OF BEERS LUNCH TIME WITH THE LADS WE ALL NEED SOME REFRESHMENTS WE GET SOME BLOW AND WEED NOW THE WORK IS OVER I HEAD DOWN TO THE PUB, PUNK ROCK IN THE JUKEBOX CHORUS TOO MANY VICES TOO MANY DRINKS TOO MANY DRUGS TOO MANY DREAMS TOO MANY VICES TOO MANY DRINKS TOO MANY FIGHTS AND BROKEN DREAMS BEER AFTER BEER, SHOTS AFTER SHOTS I ́M SO EXCITED, I ́M WAITING FOR THE GIRL A SHAG INTO THE RESTROOM, I ́M FUCKING DRUNK AND HIGH MY HEAD IS SPINNING, I FELL I ́VE LOST CONTROL I GOT INTO A FIGHT, I DON ́T KNOW WHAT TO DO MY MIND IS PLAYING TRICKS ON ME THE FLOOR IS WET AND COLD, THERE ́S BARS BEHIND THIS DOOR I ́LL QUIT EVERYTHING FOR SURE YEARS ARE PASSING BY, I HAVE NO REGRETS FOR THE THINGS THAT I ́VE DONE AND SAID ALL THE THINGS MUST COME, MUST COME TO AN END THINGS I WILL NEVER FORGET