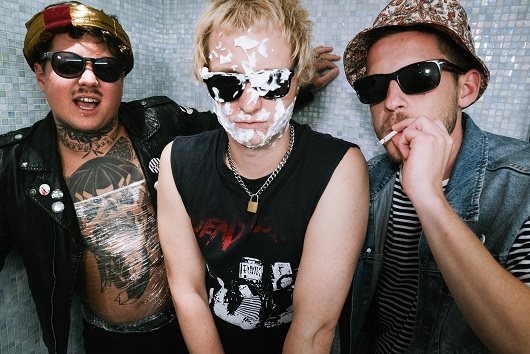 
Bad Mojos are the Spits influenced lo-fi garage punks from Bern, Switzerland, who formed in 2015 and who've appeared on here a couple of times previously. They return today with a song from their upcoming debut album, it's titled I Hope You OD and it'll be out on Voodoo Rhythm Records on December 21st https://www.voodoorhythm.com/

If you're a newcomer to the band you can check out their previous releases here : https://badmojos.bandcamp.com/

The band are a trio and line up with Jean Of Death (bass/backing vocals), Julio Blanco (drums/vocals) and Saint Martin (guitar/backing vocals). You can get more info here : https://www.facebook.com/badmojos/

The album will consist if 10 tracks, song titles include Commit A Crime, I Wanna Be Dead, Everybody Hates Me and the titular I Hope You OD. It sounds as though it's gonna be great fun (in a bad taste kinda way). This is the first video from the album, happily their sound doesn't appear to have changed much over the years, it's still catchy as hell and leaves me gagging to hear the full lp. This is Police Car...