The Glory - Falling Down 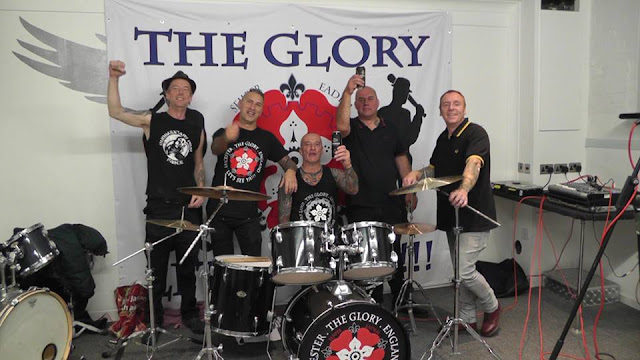 The Glory are an old school Oi band from Leicester who formed in 1985 with the intention of being a proper Oi band in the vein of Sham 69. Also influenced by the likes of Cock Sparrer, Cockney Rejects, Angelic Upstarts, Sex Pistols etc they released a split album with The Magnificent (1987's Skins 'N' Punks Volume 3) and their classic 1988 album We Are What We Are. Writers block and struggles finding venues that they could play led to them going on hiatus. An attempt to relocate to The US came to nothing and that was pretty much it.

Except it wasn't. They kept in touch, rehearsed occasionally, worked on a few new songs and then in 2010 got back to playing live with a tour of America's East Coast. Other gigs have followed, including their first UK show in 25 years (2016's Rebellion Festival) and now they're primed to release their first new songs in 30 years.

The line up of the band these days features a couple of original members. they still have the same powerful style they had back in the 80's and according to vocalist Mark Timson "This is the best line up to date, never had 1 argument ever." You can get more info here : https://www.facebook.com/theglory.oi.uk/

So, new music. Below you'll see a video for their first new song since the 1988. It'll also be the lead track on the new album. There'll be another video out in January (Mark claims it's his favourite song from the band so far) then another in Feb. Don't be surprised to see more following before the release of the album (hopefully June).

Influenced by the Michael Douglas movie of the same name from 1993 about a middle aged man dealing with unemployment and divorce who got into a series of violent encounters, This is a good old fashioned Oi singalong that whets the appetite for the album and it's called Falling Down...

Email ThisBlogThis!Share to TwitterShare to FacebookShare to Pinterest
Labels: 2018, oi. The Glory