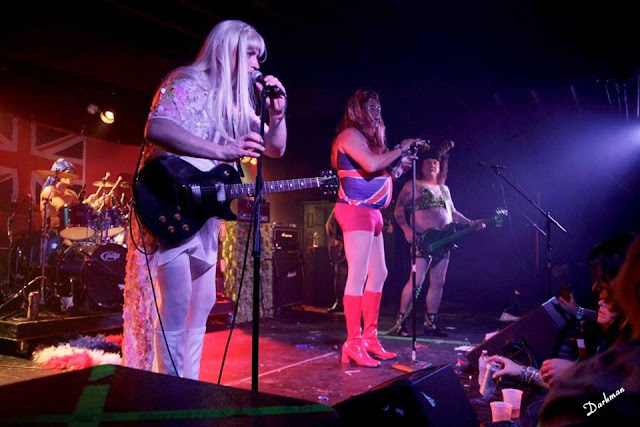 "Spice Pistols are 5 hot nasty bitches in their 40's and 50's with 5 O clock shadows that destroy razors. All experienced musicians looking to wreak havoc on your local stage. We don't wanna admit we actually like Spice Girls songs so we play em the way Sid Vicious, Steve Jones, Paul Cook and Johnny Rotten would have. With gristly passion that'll satisfy both the man and woman in you!!!"

If someone asked you to name a couple of iconic English bands from the last 40 odd years there's a few names you could come up with, with the Sex Pistols and Spice Girls probably deserving of a mention even though they're from completely different musical genres. Today's update sees them mentioned in the same breath as I'm featuring a song by San Diego outfit Spice Pistols.

They play Spice Girls songs in the style of the Sex Pistols and they do Sex Pistols songs faster and harder than the originals. They also perform their own compositions written from the mindset of both bands. Did I mention they perform in drag?

There's plenty of tribute acts out there but probably none quite like this. Don't be fooled into thinking they're solely in it for laughs though, the members of the band have been around the block and are talented musicians. Also, as bassist Hairy Scary Spice (Sppike Mike Muellenberg) tells me when chatting about the video you'll find below, "That's Rikk Agnew of Adolescents sitting in with us. He recorded guitars on another version of this song that Dave Klein of Agent Orange produced." He also tells me the band are looking to put together a tour over in the UK so if anyone can help them out with gigs or contacts please get in touch on their Facebook page... https://www.facebook.com/spicepistols/ If a Spice Girls/Sex Pistols hybrid is going to go down well with anyone it should be with UK audiences.

They formed in 2016 and earlier this year they released the 7 track album Life's A Drag. Expect songs like God Save The Queens and Wannabe but there's also this original number and title track, Life's A Drag...