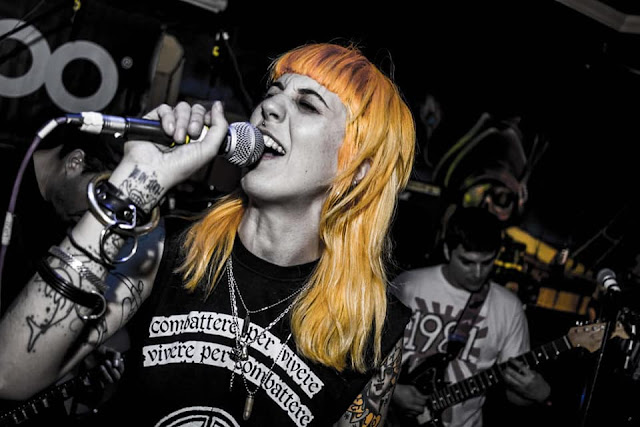 On yesterday's update I was lamenting the lack of new music this year from Madrid band Accidente (http://accidentepunk.blogspot.com/). It didn't take long before I was told that though I was right about Accidente, there was a new band from Madrid called Antidoto who featured some of the same members and who'd self released a very good album a few months ago. They feature today.

The band have a little more of a hardcore edge than Accidente, their influences include the likes of Government Warning, Career Suicide and Youth Avoiders and their line up features Sally (vocals), Mikel (guitar), Diego (bass), Isra (guitar) and Pablo (drums). As well as members from Accidente there's also some from Perras Salvajes and La Mirada Del Tigre.

The album is titled Romper Espana (Break Spain) and you can get it on vinyl here : https://www.laagoniadevivir.com/product/ladv109-antidoto-romper-espana-12  or as a name your price download on Bandcamp :  https://antidotopunk.bandcamp.com/releases

For more info and more places to get the vinyl check out their Facebook :  https://www.facebook.com/punkantidoto/

Hard hitting and with an attitude akin to a victorious bull staring down a baying mob (check out the cover), the album is well worth your time. This song is called Perdedor (Loser)....