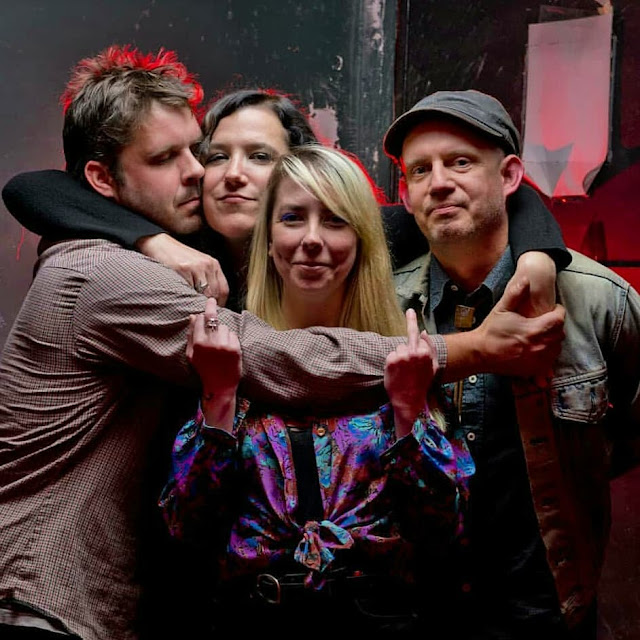 Arctic Flowers are from Portland, Oregon, they formed in 2009 and play a mix of punk, post-punk and anarcho which coalesces into a darkly gothic delight. Their line up features Alex Carroccio (vocals), Lee Lawrence (bass), Cliff Martin (drums) and Stan Wright (guitar).

I'm wary of this kind of punk as for me too many of the bands concentrate too much on achieving atmosphere rather than making great tunes a priority but I have no problems at all with Arctic Flowers, they manage both delightfully dark atmospherics and the catchiness that seems to come deceptively easy to the best bands. You can find more info on them here :  https://www.facebook.com/arcticflowerspdx/

A couple of weeks ago they released their new album, it's titled Straight To The Hunter and it's already turning up on various Best Of 2018 lists. As well as atmosphere and great songs it also crackles with ferocious energy. To me, this is how the genre should sound. It's available on vinyl and digitally and you can check it out here : https://arcticflowers.bandcamp.com/album/straight-to-the-hunter

I played this song to an appreciative chatroom on last night's Just Some Punk Songs show (the show will get saved to Mixcloud on Monday after going out on various stations in the US, Canada and Hong Kong) and am posting it here today. Straight out of the starting gate it barrels along, an oxymoron of upbeat gloom, it's called In Silence....