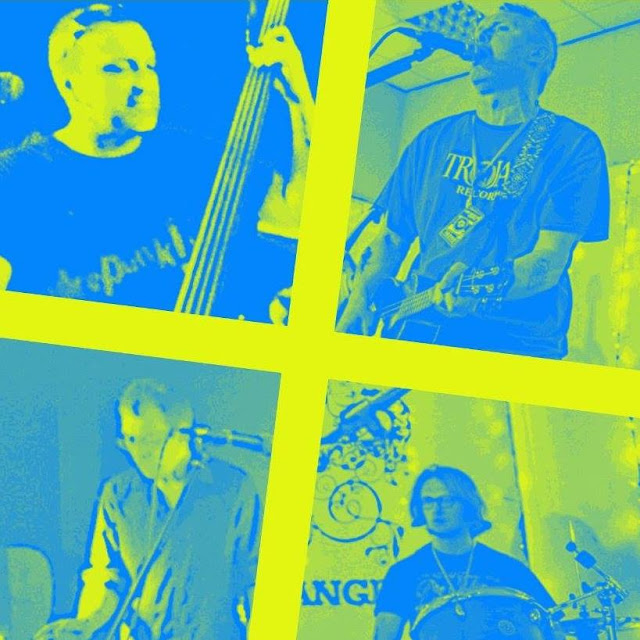 As you may have noticed, it's Sunday. This means at 8pm tonight (UK time) there'll be another Just Some Punk Songs show, another hour's worth of great new punk releases. Included will be a (different) song from the band I'm featuring on here today. Hopefully you'll listen in (details :   https://www.facebook.com/events/703047660098086/).

UkePunk are from Ramsbottom, Greater Manchester. Starting out a decade ago playing ukulele led versions of punk standards (Ramones, Pistols, Stranglers, Specials etc) they soon started writing their own material and have put out several releases singing about the likes of James Bond, fracking, northern girls and Countdown lexicographer Susie Dent. Their debut album was 2014's Punk Police, their sophomore album is out now on cd and digital formats and it's called I Blame The Parents. 12 tracks of wry humour and social observation, you can check it out here :   https://ukepunk.bandcamp.com/album/i-blame-the-parents

The line up of the band is Paul Davies (uke/vocals), Andy Moore (bass/vocals), Glenn Jackson (keys/vocals) and Luke Taylor (percussion). It's taken a while to record the album (a new baby, broken bones, shingles etc) but it's been worth the wait. They remind me a little of the likes of I, Ludicrous or possibly The Humdrum Express (or maybe even Chas And Dave if they'd been born along the M66 instead of within the sound of Bow Bells). They're definitely worth checking out   https://www.facebook.com/UkePunk/

The song I'm featuring on here today fires a shot across the bow of a right wing tabloid that delights in the spreading of hatred and mistrust. It's called Watch Out (The Daily Fail Song)...