Human Leather - You May Think It's Big and Clever, But All I See Is Fights, Vomit And Tired Nurses 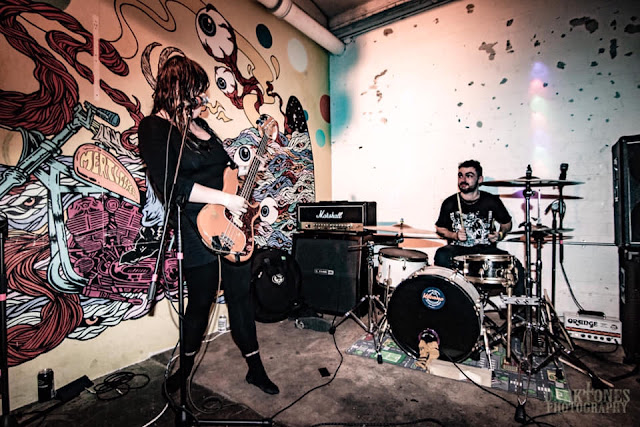 Another noisy one for you today, this time it's a snappily titled song from Brighton duo Human Leather. Featuring Tom Close on drums and Amee Chanter on bass it's not that surprising they've drawn comparisons with Rhode Island noise rockers Lightning Bolt. They recently released a 6 track ep titled Succulent, all songs are "pipin' hot out of the band oven." If you want it on vinyl it's available on 12" black vinyl, side A features Succulent whilst the flip features a remastered version of their 2016 ep Getting To Spend Time In The Canoe. It's limited to 200 copies so don't hang about. You can find details along with the digital version here :   https://humanleather.bandcamp.com/album/succulent

They've also made the cover of the latest Suspect Device zine 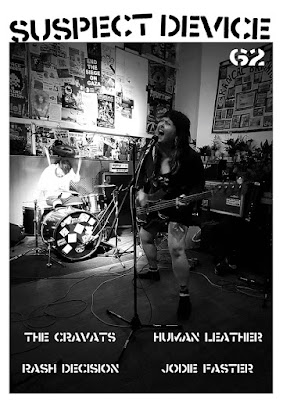 Not only do Human Leather kick up a racket, they've also come up with inventive and humorous song titles such as One Day I Hope You Realise That We're All The Same Species, Living In The Same Biosphere And That Focusing On Melanin Content Of Skin Is Pathetic. They're probably the longest song titles since Pizzatramp released their split with The Domestics. The song you'll find below is about how it's fine to drink in moderation but not to piss your life away. It's titled You May Think It's Big And Clever But All I See Is Fights, Vomit And Tired Nurses...

Hats off Well done Deserve a medal You really do Showed them You did Round of applause to you Fuck your mind Drink your money Who needs a liver when there's new ones? Where's your time? Down the pan Either that or sucked down a black hole Escape reality from time to time Everyone does it, and that's fine But now reality has long gone Tried to run, pushed under the rug Can't face the facts in this hole you've dug And the pub's always your siren song Waste To feel wasted Mind and money Slips away All That you wished for Was this it? Piss away your days Last orders Time's up Put the binge down People please A culture That's soaked with Pride in shots And heart disease Want to talk, but your head's around the cistern Want to fuck, but your head's around the cistern You are what you drink All you are is bitter What an ugly life you've lived In a fucking ugly world With the life of an only child That died