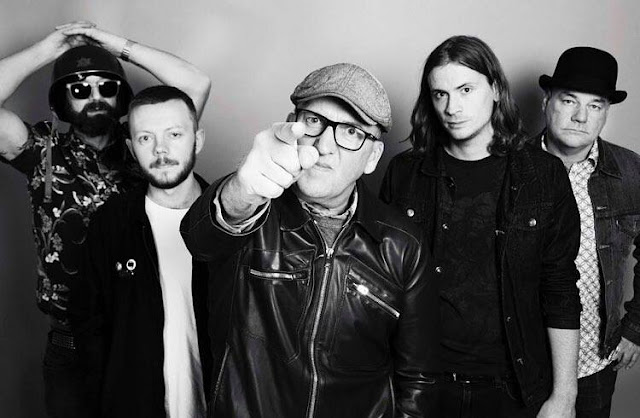 Vile Assembly are the Liverpool band who's Division Of Labour song featured on here early last year (https://justsomepunksongs.blogspot.com/2018/02/vile-assembly-division-of-labour.html). They return today with new single and if anything it's even better.

Titled Last Century Man, it originally appeared on their 2017 ep, The Elephant In The Room but in these days of "careerist politicians, corporate culture and the worldwide exploitation of those most vulnerable" it's sadly more relevant than ever. The pace of the song is considered and as you'll see in the video it's got a strong groove running through it that even the likes of Donald Trump and Charlie Windsor can boogie on down to. Frontman Paul Mason's vocals have been compared to those of a certain mr J Lydon and I can certainly hear some similarities. One of a number of bands holding up a mirror to reflect society's ills, Vile Assembly deserve your attention.

You can get more info on them here :
https://thevileassembly.co.uk/
https://www.facebook.com/TheVileAssembly/

This is Last Century Man...