The End Of Ernie - That Alternative (Review By Dirk Ceustermans) 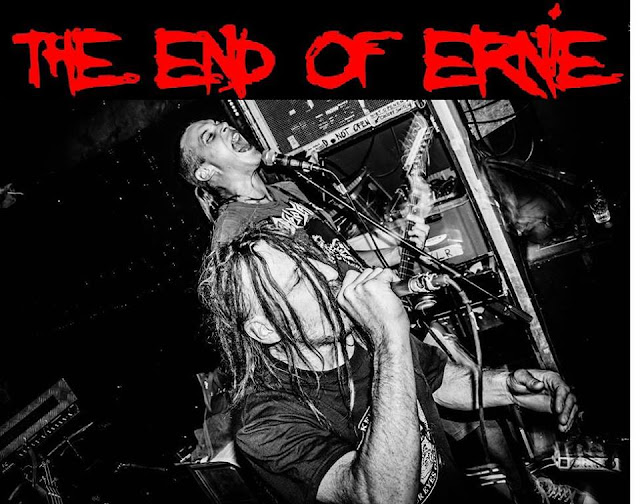 Another one of Dirk's reviews today, this time he's chosen a song from an album that came out in 2017 which though a little older than most stuff posted on here nowadays at least gives me a day off!  Over to Dirk...

THE END OF ERNIE

The End of Ernie is a band that's been around for 3 decades already. I remember seeing these
in different line ups throughout the years, but must admit I lost touch between mid 90s and mid 00's. In 2017, after seeing them a few times live again, doing solid performances, I was convinced enough to get their then newest release.

I thought of showcasing them as I saw them this month, opening up for Anti-Pasti in Brussels, which was again a great concert.

I must say that lp is a regular on the turntable, with 16 fast paced songs exactly
how they describe themselves as "A punk-orientated band, related to the 80`s, with touches towards crossover, crust and hardcore."

That sums it up quite appropriately, and the song "That Alternative" easily fits that description.
Adding to that, with lyrics expressing a 'fin de siecle' atmosphere with a good dose of anti-establishment. In this song in particular, the lyrics seem to indicate two worlds we live in, the world where everyone lives according the norm and the other world of alternatives, DIY'ers etc..

We all try to avoid and bypass those that just live bland lives, I find it's nicely pictured in the words here: making his "own sidewalk to pass by normal folks". I think singer Luc expresses the feeling not to fit in and to live it our own way. Not preaching out you should live that way, as he speaks out for himself, allowing us to think about that topic for a while. One minute, thirty seconds to be precise.

WITH EVERYTHING I DO
I NEED TO TAKE A STEP A-SIDE
TURN AROUND AND CREATE
ANOTHER SIDEWALK TO PASS BY
WITH EVERY MOVE I MAKE
I CREATE BEAUTIFUL IMAGES
BUT WITH EVERY STEP, I BREAK
IN A WORLD OF COMPLETE IGNORANCE

I NEED THAT ALTERNATIVE

I NEED THAT ALTERNATIVE

Email ThisBlogThis!Share to TwitterShare to FacebookShare to Pinterest
Labels: 2017, punk, The End Of Ernie