Interview With Richard Brown (The Proletariat) 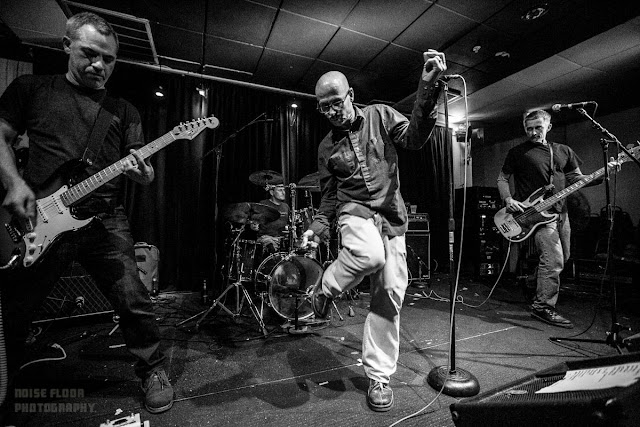 Not only did Southeastern Massachusetts punks The Proletariat appear on the seminal 1982 compilation This Is Boston Not L.A. they've also gone and released one of the best albums of 2019. Rather than just post a song from it and do one of my crappy introductions I decided to ask the band's frontman Richard Brown a few questions about the band and about his views on the punk scene both back then and now. Happily he was very accommodating and so after a couple of links I'll post the interview.


Can you give me a brief history of the band

The idea of forming a band was Peter's ( Bevilacqua/ bass) brainstorm around 1980... We had a couple of different guitar players early on before we could convince Frank ( Michaels/ original guitarist) to join. Once we had Frank the initial line up was Frank, Peter and myself with me doing the stand up drum thing ala Stray Cats. Our current manager, Patrick Norton, found Tommy ( McKnight/ drums) for us and we started it up. We caused a riot at an outdoor show in Providence, RI by playing a sarcastic, mocking version of "Free Bird"--- bottles, flying, police dragging us off stage, hippies attacking our van. We made the evening news and the next day got offered shows supporting Black Flag, Circle Jerks and Dead Boys. We got asked to be on This is Boston not LA, recorded two lps in the 80s Soma Holiday and Indifference... reformed in late 2016 with our new guitarist Sanders and released " The Murder of Alton Sterling" ( Bridge 9) last year and just released our third Lp Move last month.

You're still putting out music after 40 years, why? what inspires you to keep going?

The whole 40 year thing is a bit misleading in our case. The first run was 1981-1985, them we went dormant for three decades till 2016. People assume that because we're a political band that we reformed in 2016 because of Trump's victory...not the case. Scott Soriano (Ss Records) reissued Soma Holiday and we decided to play a few shows in conjunction with the reissue--- the shows went so well that we kept it going. As far as what motivates us after all this time that's kind of easy--- we want to speak out against racists, sexists, abusers, those that hate the LGBTQ community, war mongers, fear mongers, etc... these fucks have been emboldened here in the states under our current president...and to not speak out against them is not an alternative.

What do you see as the major differences in the punk scene 2019 compared with when you started?

How is the scene different now (2019) from say 1983? There are some differences between the two eras, but there are a lot of things that haven't changed, for example: DIY shows are still flourishing--- we played Black Lodge in Seattle in 2017 and it reminded me of shows from my youth. Doors open, bands play, pack up quickly and lock up before the cops come--- it was great. As far as differences I find the crowds more mixed age wise, I find the younger punks to be kinder and more inclusive than punks back in the day...we'll always be outcasts, all of us, but kids today are far more receptive to the idea of "everyone is welcome, and everyone is safe here"


Has the internet been a positive or a hindrance to the band?

Not to sound like a politician, but honestly there are pros and cons. Its easier to find venues in other cities, to learn the lay of the land, if you will, about different scenes, and to get your music and message out to more people. The downside(s) are the music streaming sites exploit the bands, who receive laughable payments via miniscule checks... attendance at live shows, I think suffers, because people can hear all of a bands new material from the comfort of their couches and chairs. Why deal with ticket prices (no matter how reasonable), the late hours, the cost of a few drinks...


After 40 years of playing live, is it easy (or even possible) to maintain that energy generated in the early days and what are the audiences like nowadays? are they mainly the people who've been following you for years or do you get many youngsters coming along?

Personally the easiest way to maintain a high level of energy is to write/play new material that forces you to play at that level. At first it was easy to do old songs that you hadn't done in decades, but that got old for us pretty quickly. Right now our set is probably 50% older songs and 50% new stuff. It keeps it interesting, I also like to throw in a different cover as well. The first few shows was a mix of people who had seen us, people that had just missed seeing us in the day and new kids that probably got hold of BNLA. Evidently we were a bit of a "bucket list" band... every show had people saying "I didn't start going to shows till 1986 and by then you had split". With a few exceptions we have always ( since reforming) tried to get newer/ younger bands on the bill, their audience would probably never go see us and the old cats might never venture out to see new bands.


What was your favourite gig of all time and conversely, what was the worst?

Strangely enough the best and worst shows, in my opinion, took place just a few months apart. The Worst Prole Show Ever: Exit 13, Worcester, Massachusetts, January 1983. January in Worcester, to begin with, is as morbidly depressing as January anywhere else inside the Arctic Circle. Cold, gray, wet... Exit 13 dank biker bar with inbred staff and literally NO paying customers. Ooof. Best Prole Gig Ever: Was the Mission of Burma farewell show at the Bradford Ballroom in Boston---March 1983. It was definitely the largest crowd we had ever played to. There were two shows, afternoon show was Burma/Dangerous Birds (Thalia Zedek's first band) and Negative FX... evening show was Burma / The Proletariat / Christmas.


THE MURDER OF ALTON STERLING

Are there any plans for the band to come over to the UK or Europe?

We have always wanted to play in Europe and hopefully we get to. Ideally we hope to arrange a hub and spoke type set of shows with say a festival and then other shows off of that. With Boss Tuneage releasing the vinyl Move Lp, hopefully it spikes enough interest in the band to make a trip over necessary.


As a left leaning band does it frustrate you that nothing ever seems to change in the world of politics with the corrupt and the inept rising to the top whilst the planet is crying out for visionary leaders to try and tackle issues like climate change, inequality, hunger etc...

Sadly the only change that ever seems to happen is a change for the worst. Far too often I find myself holding my nose as I cast my ballot for the candidate I consider to be the lesser of two evils.


Tell me about your new album

The new lp is titled Move. I guess anyone that is in a band that puts out a new record probably finds it to be "their best record yet"... and I'm no exception. We hadn't been in a studio since 1984/85 and my mind was completely blown with how different the process had become. Initially I feared that the record might sound "too clean", but it came out great. We wrote the songs over probably a ten month span with a pretty unique way of writing. Sanders(guitar), Peter (bass) and myself would use a drum machine, record the song and then send it cross-country to Tommy (drums) to add his beats... I should mention that three of us live on the east coast (Massachusetts and Rhode Island) while Tommy lives in San Francisco. I guess the lp's subject matter is in line with previous Proletariat albums, very political, but different in that while Soma Holiday and Indifference railed against the then fledgling supply side economics, Move rails against an economic thought process that over the last three decades plus has become more established and dehumanizing.

Email ThisBlogThis!Share to TwitterShare to FacebookShare to Pinterest
Labels: interview, punk, The Proletariat