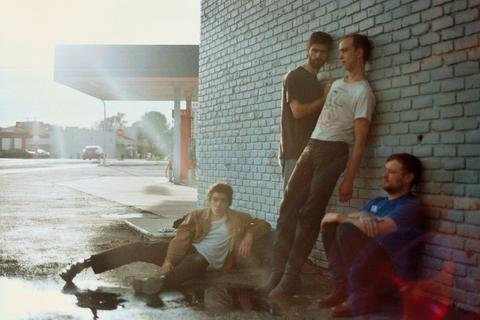 Institute are from Austin, Texas (although half the band have now relocated to New York) and they've just released one of the year's best albums. It's called Readjusting The Locks and it's a beast of a record. I was impressed 4 years ago when I first came across them (https://justsomepunksongs.blogspot.com/2015/01/institute-giddy-boys.html) but impressive as they were back then, they've stepped up a few levels. Despite being geographically rent asunder, Barry Elkanick and Adam Cahoon (Texas half) met up with Moses Brown and Arak Avakian (New York half) in Houston to demo the album before meeting up again in Brooklyn a couple of months later for the proper recording. The result is 13 politically charged shots across the bow of the neoliberalist establishment. It's a clarion call against "sweeping the well being of humanity under the rug in the name of advancing ourselves." The band argue that without a true plan for a sustainable future, false promises will take us past the point of no return. The album's available on ltd edition clear and brown marble "Bourbon" vinyl : https://www.sacredbonesrecords.com/products/sbr222-institute-readjusting-the-locks

You can check it out on Bandcamp here : https://institute.bandcamp.com/album/readjusting-the-locks

This is Roll Music...