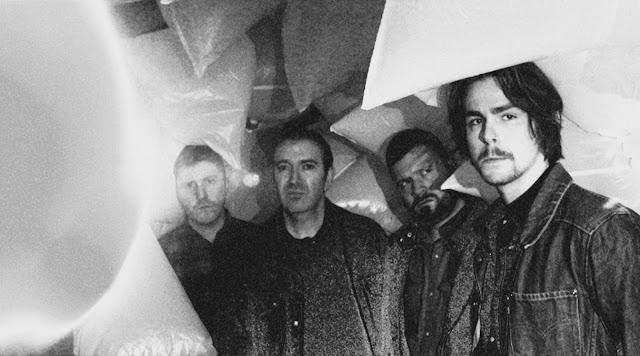 "If it's me and yer granny on bongos, it's the Fall" said Mark E. Smith and for over 40 years it almost seems as though due to the transitionary nature of the band nearly everyone except for yer granny featured in one of the many line ups. Over the past 11 years though, Pete Greenway (guitar), Keiron Melling (drums) and Dave Spurr (bass) survived the cull and remained as the longest running engine room in the band's illustrious history. But then tragically Mark dies and the band are left without their iconic frontman. I suppose they could either call it a day or despite the seemingly impossible task of replacing a legend, carry on regardless. On the evidence of their debut album, it seems as though they made the right decision.

And so to the man with the impossible task. New singer Sam Curran. No matter who the new frontman was, he wasn't going to be Mark E. Smith and thankfully he doesn't try to be. So farewell The Fall, possibly the band who've given me the most enjoyment in my life, and welcome Imperial Wax.

The new album... It's titled Gastwerk Saboteurs and it's out now on Saustex Records   http://www.saustex.com/IMPERIAL-WAX.html

You can also find it on Bandcamp : https://imperial-wax.bandcamp.com/album/gastwerk-saboteurs

A dozen inventive post-punk tracks that cherry pick bits from various genres. The Fall are no more but Imperial Wax have made an album that shows plenty of promise and deserves your attention. I'll play a different song on tomorrow's Just Some Punk Songs show (https://www.facebook.com/events/2445735785659571/) but today you're getting my favourite. This is Rammy Taxi Illuminati...