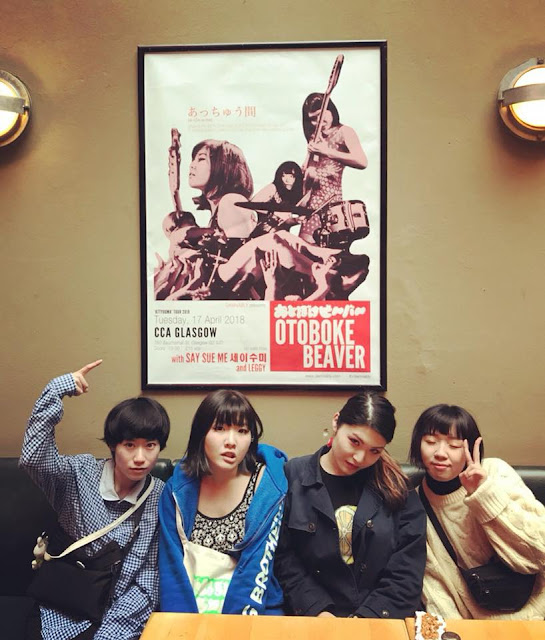 Another band that wowed the chatroom crowd during the latest Just Some Punk Songs show (https://www.mixcloud.com/mick-fletcher/just-some-punk-songs-170418/) were Japanese girl band Otoboke Beaver. They're from Kyoto, play kick ass garage punk and feature a line up of Accorinrin (guitar/vocals), Yoyoyoshie (guitar/backing vocals), Hiro-chan (bass/backing vocals) and Pop (drums/backing vocals). They formed in 2009 whilst at Koyoto University's music club and they take their name from a local "love hotel."

A couple of months ago they released a 7" single (apologies for totally mispronouncing the title on the show) and you can find it, along with plenty more of their releases, on Bandcamp : https://otobokebeaver.bandcamp.com/album/anata-watashi-daita-ato-yome-no-meshi-2

They're currently gigging over in the UK (the final gig is in London tonight) before they head across the Atlantic to play the Coachella Valley Music and Arts Festival. Check out details here : https://www.facebook.com/Otobokebeaver22/

It's 2018 and people have been saying punk is dead for the best part of 40 years. Proving those people totally wrong, this is Anata Watashi Daita Ato Yome No Meshi....