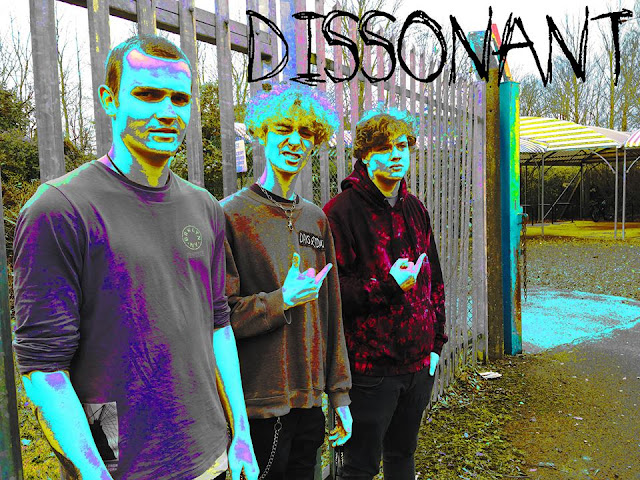 Today you're getting the first song released by a band that I stumbled upon yesterday and thought, "yep, that sounds like a promising introduction." The band in question are called Dissonant, they're a 3 piece from Barnstaple in North Devon, they formed last year and they're "edgy teens angry about the government and that..." The line up is Will Rogers (bass/shouting), Alex Terry (guitar/shouting) and Ollie Chavasse (hitting things) and their influences include Anti Flag, Minor Threat, Black Flag, SNFU, Wonk Unit, NOFX and Pears.

Their first release is a single which you can download a free track from here :   https://dissonant.bandcamp.com/track/corrupt-single

Angry, political punk that bodes well for the future. This is Corrupt.....

You don’t have to listen to what they have to say They’re not gonna make your problems go away They’ll take take take from you until your wallet’s dry They’ll keep on doing that until you fucking die (CHORUS) All your leaders are fucking corrupt Their money’s off shore so it can’t get touched It’s a rule for the rich and another for the poor And I don’t wanna take it any more The army of the streets, It’s nothing but brutality Enforcing what the government thinks is best for society The white man gets away with it but if the lad’s black the body cam breaks How many more deaths until the world realises it’s mistakes (CHORUS)x2