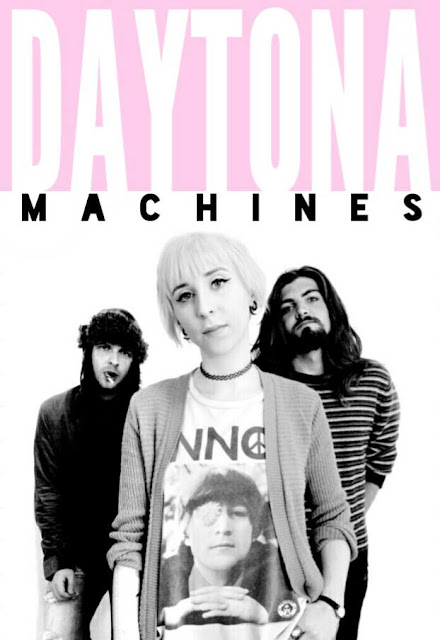 A big thanks to Vista Blue's Mike Patton for this week's guest review. Pretty much all Vista Blues extensive back catalogue (including new album End Of The Season) is available to download name your price so fill your boots.... https://wearevistablue.bandcamp.com/

Mike's chosen a song by Nashville band The Daytona Machines and he's written a few paragraphs to go with it so thanks for that and over to Mike....

The Daytona Machines are a newer band from Nashville, and while they're definitely not straight "punk," they certainly fit in the scene and have clearly been inspired by punk along the way.
Personally, I love their strong '90s influences, from pop punk to radio alternative. They can go from Pixies to Nirvana to Green Day within one song. And it all rocks.The three-piece is led by Eric Scott on guitar and most lead vocals. Iris Lish plays a great bass, sings harmonies, and takes lead vocals sometimes. And Jalen Reed is a ball of energy behind the drums. I definitely recommend seeing this band live to get the full experience.For today's feature, I'm highlighting their track "Cleveland Street." While all of their songs are catchy, "Cleveland Street" was immediately stuck in my head for a couple of days after I first heard it. I've played it on my radio show here in Nashville, and I think it's a great representation of what the band brings to the table.When I recently asked Eric about the song, he said, "I came up with Cleveland Street when I was driving around East Nashville delivering sandwiches. I kept getting orders from houses on Cleveland Street, and during rush hour, traffic is murder over there."After writing a verse in his head and bringing it to Iris and Jalen, the band worked out the rest of the song."I originally intended it to have more of a Velvet Underground 'I'm waiting for the man' feel," Eric said. "But it kind of morphed into a fast paced punk grunge thing."The band just released its debut six-track EP digitally this week on Bandcamp and will be announcing a physical release date soon.

This is Cleveland Street.....