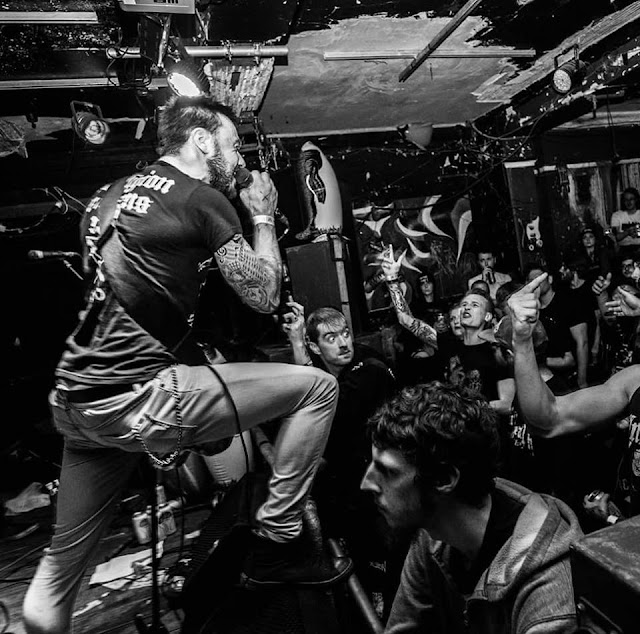 Wow! I can't believe that it's 10 years ago that Myths, Lies And Hypocrites by The Infested was my favourite album of the year. From Leeds, the band were the UK's equivalent of Choking Victim/Leftover Crack; fast, angry crack rock steady tunes mixing ska punk and hardcore and singing about stuff like assisted suicide, cops, drugs, religion, the UK being just as much to blame for the shitty state of the world as the US etc. All topics that are just as relevant today. This is a band that holds a mirror up to the world to reveal a grim reflection. If you missed Myths, Lies and Hypocrites you should check it out :  https://ehcrecords.bandcamp.com/album/myths-lies-hypocrites-ehc014

2011 saw them release a split ep with Evesham band Officer Down and in 2013 they released another very decent album, Eaten From The Inside. So 5 years later, just as world tensions escalate, they're back with a new album. It's titled Raw Ensemble and it'll be out on 21st May (vinyl, cd, digital) on EHC Records. You can preorder or get more details here :  https://ehcrecords.bandcamp.com/album/raw-ensemble-ehc022

No Time Records will be stocking it in the US and Canada :  http://notimerecords.storenvy.com/products/23669433-the-infested-raw-ensemble-lp

They've (I'll say they though it's pretty much a solo project nowadays with frontman G playing all the instruments whilst co founder Lee returns to add additional vocals) given us a taster (they haven't lost any of that anger or relevance) in the form of the album's first song. The mirror's reflection is grimmer than ever. There's no shortage of things for them to be pissed about which I'm confident will mean the album will be a classic.

Terrorist threats and attacks in the West
Mass distraction, your satisfaction
Innocent children targeted in your quest
Devastation, no hesitation
Extremist views, you see so black and white
Why do we need to drag them in to the fight?
You hate our values and commodities
No justification, why can't you see?

Shut your books now, put your guns down
Al Qaeda, the IRA, AOG and the KKK
revolt, Islamic State
Purveyors of hate

We are despised because we do not believe
Warped and twisted, sick elitists
Disgusted by us and our equalities
Lives are wasted, obliterated
Detract from reality as streets fill with hate
The ignorant are utilised as bait
Sweeping statements, blame entire cultures
It's easier to hate them than unite with each other