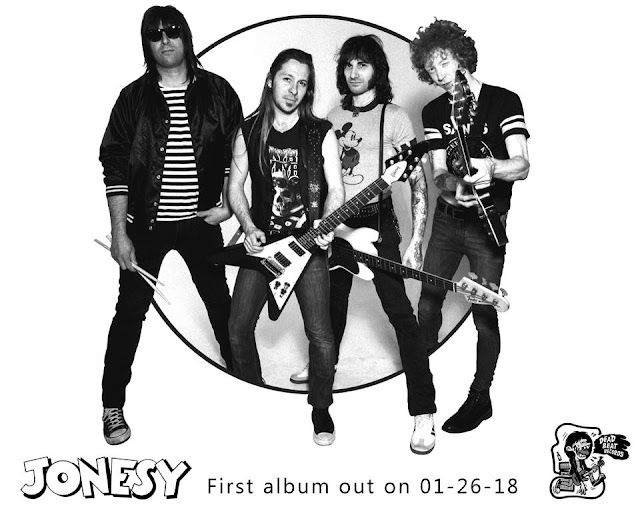 Jonesy are a self confessed sleazy rock n roll 4 piece from Montreal who's line up features Vinny Ramone, The Maniac, Nick Chase and David David. Between them they've previously played in Clean Cuts, The Fanatiques, Rusted, Cheap Thrills, Red District and Dagger Eyes.

Influenced by the likes of The Stooges, Dictators, Chuck Berry, Ramones, New York Dolls etc, they're a throwback to an era when rock n roll bands were cool, edgy and had an unending supply of great tunes. Sex & drugs & rock & roll sang Ian Dury. Well I've no idea about the drugs but there was plenty of the other 2 present in their debut 7" which came out in 2016 on No Front Teeth Records and is available on Bandcamp : https://jonesyrocknroll.bandcamp.com/releases

They recently released their debut S/T album. Chock full of swagger, solos and no small amount of humour it's available on vinyl from Dead Beat Records  https://shop.dead-beat-records.com/products/jonesy-s-t-lp

Thanks to them for letting me put this song online, it's a great example of their sound and makes me want to catch them live if they ever head over this way. If you like old school rock n roll you'll love this, it's called Hate Me....