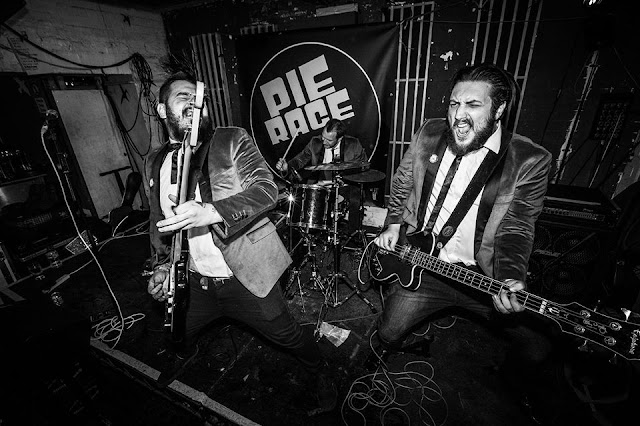 A guest review today from Stefan Ball who is vocalist with Reading band Who Killed Nancy Johnson? https://www.facebook.com/WhoKilledNancyJohnson/

Stefan has kindly reviewed Scratching Circles On The Dancefloor, the debut album from Leeds garage punks Nosebleed. I'll leave you in his capable hands.....


One of the positive things about the rise of streaming and downloads and the rebirth of vinyl is that 70 minute CD borefests are a thing of the past. Recordings can be just as long as they need to be.

Scratching Circles on the Dancefloor, the first extended release from Leeds trio Nosebleed, is a good example. It's 25 minutes and 13 tracks long. You wouldn't want it any longer - or I wouldn't, not without a sit down in the middle - because it's impossible to stand still while it's playing. The whole thing crackles with energy.

All the songs are fast. But they're proper songs, never hurried. There's time for solos, Lux Interior-style vocal quirks and the odd build-up and change of pace. Even the opener "I'm Okay" - just 54 seconds - packs in an intro, two verses, a couple of hooky choruses and a punchy end. It develops and gets somewhere, then stops. Perfect.

I honestly can't find a weak link on this album. My favourite at the moment is maybe "Start Again", which opens with a guitar riff that could be from early Gang of Four and has the kind of chorus you'd be yelling along with live.

Talking of live, I haven't seen them (yet) but David Hennessy from The Delinquents saw them a couple of days ago in Scotland and posted on his Facebook page: "seen and played with a lot of fantastic bands in the punk scene but Nosebleed were absolutely premier league calibre tonight."

You'll have a chance to decide for yourself if you're in the UK as the band are on tour from now and into the summer - and slipping across into mainland Europe for a couple of dates as well.

I'd expect that on stage you'd get pretty much what you get on this recording, because it has that live sound. Credit to the engineer if he's managed to get this much punch and raw energy from a more clinical recording techcnique - I suspect though they did it the old-fashioned way, and good on them for that.

On their Bandcamp page the band say they copied "as much as we could get away with" in their songs - a nice bit of self-deprecation. But it's kind of inevitable with rock and roll, of course - punk rock and rollers are still playing around with the same three chords the Bill Haley was using. So yes, I can hear a lot of The Rezillos in this record - and nods to The Cramps and The Saints and The Hives and a bunch of psychobilly and garage punk bands - but they all borrowed from the people before them, and they all borrowed as well, all the way back to the blues.

The truth is all the raw guitar music we know and love - whether it's the Medway bands or the current stuff coming out of Australia or Howlin' Wolf - is part of a tradition and has a heritage. This record sees Nosebleed picking up the torch in fine swaggering style. Great stuff.

This is Scratching Circles....