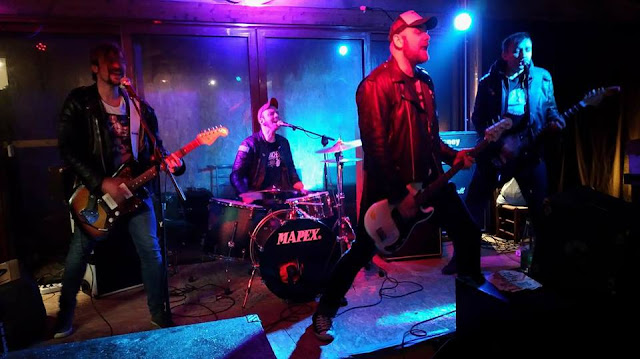 It's been nearly 4 years since German pop punks Neon Bone featured on this blog (http://justsomepunksongs.blogspot.co.uk/2014/12/neon-bone-youre-alive.html) but they're still around and still releasing some of the catchiest tunes going. Starting up in 2010 in Munster as a one man band and taking their name from a M.O.T.O. song they've expanded their line up and honed their Queers/Parasites/Ramones style of punk rock over the years : https://neonbone.bandcamp.com/

Now they're back with a new album, their 3rd. It's titled That Dog Won't Hunt and it's out on Monster Zero Records in association with Mom's Basement Records. If you're a fan of 50's & 60's inspired Bubblegum Punk then this is for you. All the songs are sub 3 minute ear worms that'll get you tapping your foot and singing along, there's even a cool version of Skeeter Davis' 1962 classic The End Of The World. They're the kind of band that would go down a storm if they were the new resident band at Arnold's Drive-In on Happy Days. The sun's out, Spring is in the air and this would be a perfect soundtrack to your day...  https://monsterzerorecords.bandcamp.com/album/that-dog-wont-hunt

This is the video for the album's lead track, it's called Waiting....