Stiletto Bomb - Screaming From The Bottom 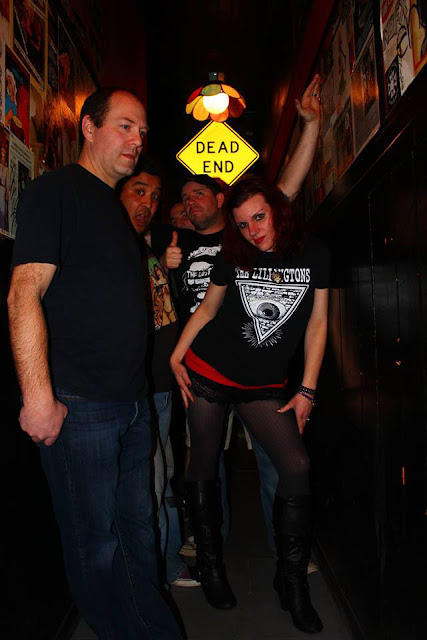 I'm very happy that I can bring you an exclusive today, the song I'm posting below is appearing online for the first time so I'd like to thank Jay for allowing a small blog that's nothing more than a labour of love hobby the chance to debut it.

Some of you may remember that I posted a song called Ampgrinder a while back. It was the calling card of Stiletto Bomb and I predicted it would end up being one of 2015's best tracks. Now, very impressively, they've added another 5 tracks to it, and it's part of their debut ep, In The Dark. Rather pleasingly every track's a winner and my early prediction is going to be spot on. It's due out on Mooster Records on 7 August but you can pre-order it here : https://stilettobomb.bandcamp.com/releases

The band, for those who haven't already discovered them, features J & Matty Prozac (The Prozacs) and Scotty & J Blood (The Uncomfortables/Pajama Slave Dancers). Possibly the most pleasing aspect of the band however is that Jay's recruited his wife, Andy Nihilate as co vocalist and their duelling vocals, combined with the fast tempo tunes and catchy as hell choruses make me declare that this could well turn out to be his best work yet.

An adrenaline rush of a song, this is Screaming From The Bottom......

Give it everything you've got
your heart, your soul
sometimes it's not enough
and it keeps us wondering...

I hate these feelings of depression and despair
it's a disease runs deep it's rotting at the core
it's something in our hearts we just can't let it go
the blood, the sweat, the tears
we call it rock and roll