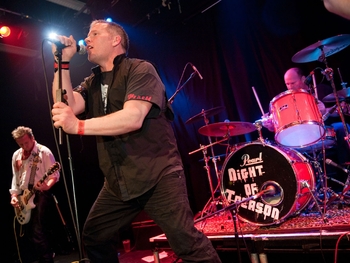 Another song from the UK today, this time from 2012, it's by Night Of Treason, a band from Gosport, a town which is on England's south coast not too far from Portsmouth. They actually wrote a song for their local football team, Gosport Borough, to commemorate their FA Trophy final appearance against Cambridge Town in 2014.

Night Of Treason began life as a covers band but they soon began penning their own material. The album that today's song is taken from is called Gentleman And Hooligans, it came out around 7 years after they got together and benefits from them having had time to mature and hone their sound. They were pleased enough with the record to describe it as "the best English punk album since the 70's."

Influenced by the likes of The Clash, The Alarm and Billy Bragg, they're a band that deserve a wider audience, please lend them your ears. This is The Ballad Of The Teddy Boy From Ladbroke Grove.....