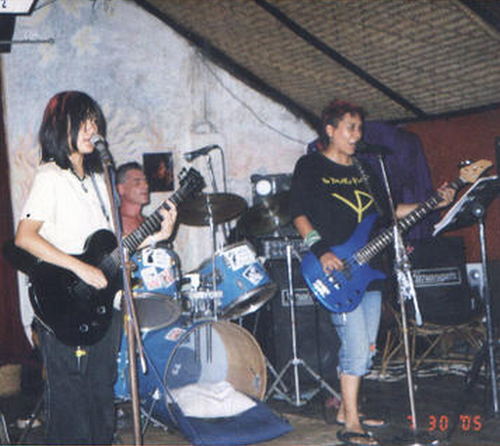 
After I posted a song from India yesterday I was told by The Strange, Obscure, DIY And Outsider Music Group's head honcho  Gary Riley that whilst there is punk in India, Nepal is better. So today, I'm adding a song from that country.

Most of their songs concern themselves with the exploitation, hatred, sexism, domestic violence, unequality etc towards the women in the Nepalese community. They played many benefit gigs in support of those causes.  "Grim as the subject matter might be, Tank Girl's music makes you want to jump around and join them in rebellion against the infuriating reality of sexism."

As for their music, in 2005 they released an album called ...Kids With Guns + Choco Fun!! which received a European release on German label Dorfpunkgangdeluxe. Featuring on that album is a great cover of X Ray Spex's I Live Off You which I was tempted to make song of the day but I decided instead to go with one of their own compositions (if you want to hear the X Ray Spex cover click here :  https://www.youtube.com/watch?v=kz-PQVeqdy4 ).

If you enjoy ballsy female fronted punk music, you should love this. It's called Eh Bau!......