The Underdogs - Never Gonna Give Up On Myself 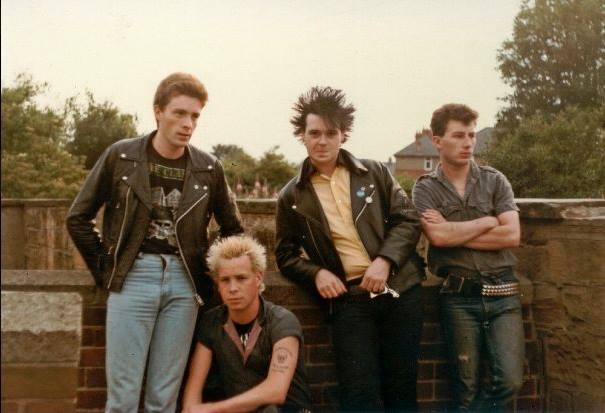 Another song from the 80's today, one of several that I've posted recently that would probably have been hits if they'd been released a few years earlier before the mainstream decided that punk was no longer relevant. For all those people that swapped their bondage trousers for their partner's make up bags once punk had been pronounced dead, you missed some killer tunes guys.

The Underdogs, like many bands from that era, weren't overly prolific. From Leeds, they only released a couple of demos (Riot In Rothwell and East Of Dachau) and a 3 track ep, also called East Of Dachau, which came out in 1983 on Riot City Records.

They were U.G. (vocals), Col (guitar/vocals), Bill (drums/vocals) and Martin (bass/vocals) though Martin was replaced after the single came out by former Expelled bassist Macca.

Forthcoming is their Punk Demos Collection that will feature remastered versions and is out on Common People Records in October :  http://commonpeoplerecords.bandcamp.com/album/the-underdogs-the-punk-demos-collection-cpr011

Probably my favourite of theirs, this is Never Gonna Give Up On Myself....

When I was small,
I learned lots of things,
pissed it all back by the wall
Memories of school,
kicking cobbled stones,
smoking and breaking the...
prima donna of power still calls
Tells me how I made a mess of it all
But I ain't finished yet
So let's go...
I'm never gonna give up on myself!
I'm still in spring,
getting older everyday,
but learning how to live
Bring myself up, to do things my way,
disregard the...
prima donna of power's still there,
And they still stop and stare
But I ain't finished yet...
So let's go...

Email ThisBlogThis!Share to TwitterShare to FacebookShare to Pinterest
Labels: 1982, punk, The Underdogs