The Adicts - Johnny Was A Soldier 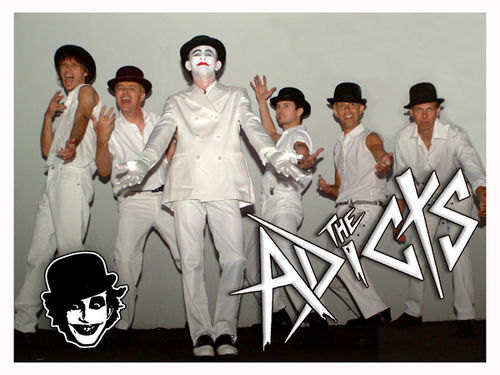 Yesterday's song concerned itself with the white crosses that mark the graves of fallen soldiers, today's concerns the plight of those who survive the conflict but suffer physical and mental scars.

The Adicts are from Ipswich and lay claim to be "the longest running punk band in history with all original members." They formed in late '75 (originally called Afterbirth & The Pinz) and played their first gig in a scout hut in Aldburgh, Suffolk.

Their first release was 1979's Lunch With The Adicts ep whilst debut album, Songs Of Praise didn't surface until 1981. One of it's tracks and possibly their best known song, Viva La Revolution, was released as a single a year later. Since then their body of work has swollen considerably. They're one of the most visually striking bands around with their Clockwork Orange inspired droog imagery.

The song I've posted below is taken from their 1982 album, Sound Of Music, and is possibly my favourite of theirs (although by tomorrow that accolade could be accorded to another song). This is Johnny Was A Soldier......

Email ThisBlogThis!Share to TwitterShare to FacebookShare to Pinterest
Labels: 1982, punk, The Adicts