Xtract - Blame it on the Youth 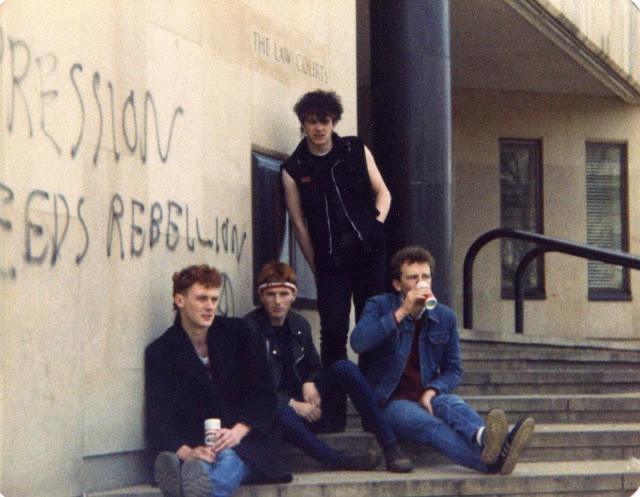 A protest song today from 1983 which concerns itself with police violence and the blame game that invariably follows. As several recent high profile cases have shown, 30 plus years later the sentiments expressed are still sadly all too relevant.

Xtract formed in 1979 in Bolton and a couple of demos and a compilation appearance led to them entering Manchester's Revolution Studios to record a 4 track ep which was released on Pax Records and featured Blame It On The Youth, War Heroes, Iron Lady and Boys In Blue. The line up on this recording was Dave "Harvi" Howarth (vocals), Karl Morris (guitar), Rod Barker (bass) and Eddie "Kip" Fisher (drums).

Despite good reviews for the ep Morris left shortly after it's release to join The Exploited and the band soon fell apart. Since then they've reformed several times with new members and are currently active with Harvi still on vocals, Lee Johnson (guitar), Shell Rayner (bass) and Corporal Vinnie (drums). Keep your eyes peeled as there's a new cd on the horizon.

The guns of oppression are pointing at youLooking down the barrel of one tonightThe special squad cars are on red alertYou know the policeman is always rightBlame it on the youth, they always doBlame it on the youth, we're ready for youMurder is a crime unless you're a copThen it's all to do with dutyI only thought they were there to scareI never really thought they'd shoot himIf they make a mistake they'll cover it up, find some ridiculous lieMorning newspapers gloating on violenceHow many more will suffer and die?Everywhere you go, it's all the sameYou're just another pawn in a bigger power gameIt's the same all over the worldJustice just isn't fairOn law for them and another for usThey'll strip your dignity bareJustice is a load of bollox, it really doesn't existYou're just another target on a policeman's list