The Dream Dates - Moans on the phone 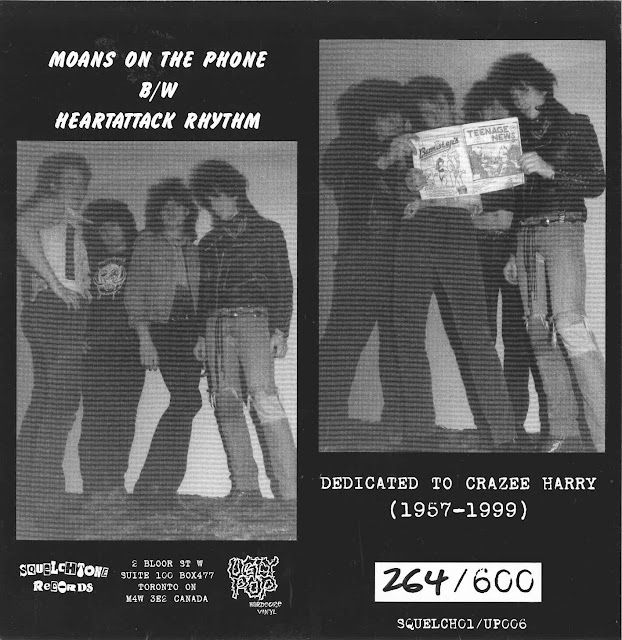 Today's song was originally recorded in 1979 but didn't get a proper release until 2000 when Toronto label Ugly Pop Records and Squelchtone released 600 hand numbered 7" vinyl copies.

The Dream Dates were from Hamilton, Ontario and consisted of Dikky Fix (vocals), Brian Deemer (guitar), Lance Womanhandler (bass) and Beef Stu (drums). Forming in 1979 and originally named Bored Youth, they played a first gig supporting The Viletones before changing their name. Influenced by (amongst others) Dead Boys, Teenage Head and Forgotten Rebels, they had just one recording session which resulted in 3 original tracks and covers of songs by the likes of The Stooges, The Surfaris and Freddie Cannon.

The first of these tracks to make it to vinyl were the pairing of Moans On The Phone and Heart Attack Rhythm. Subsequent to this were The Mess You're in/Search And Destroy and Surfer Joe/Tallahassee Lassie.

Following the break up of the band, Dicky Fix (Greg Dick) played with members of The Heartbreakers in Texas Dirt Fuckers as well as numerous other groups.

This is a great example of late 70's sleazy punk n roll, Moans On The Phone....

Email ThisBlogThis!Share to TwitterShare to FacebookShare to Pinterest
Labels: 1979, punk, The Dream Dates