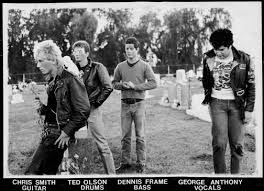 As is often the case, I didn't know what I was going to upload today when I turned the pc on. All I had in mind was that I felt like posting something fast and noisy and probably something old to break up the run of recent releases. The song I decided on ticks all the boxes.

Battalion Of Saints started up in San Diego in 1978 with the original name of The Nutrons. Not only did the name change, so did the line up. Frequently. Until,  in 1985, they split for good. Though as is often the case, for good was only until 1995 when founder member and vocalist George Anthony decided it was time to get the show back on the road (not only are they still on the road, there's new material in the can awaiting release).

The song I'm hoping you'll turn the volume way up on today was released as the title track of a 3 track 7" single in 1983. It's called Second Coming (which would also be the title of their 1984 debut album). Needless to say it fucking rips.....


It streaks across the sky towards Bethlehem
A shining star filled with hope and love.Second coming, the new Christ won't survive
It's a second coming the Christ will dieHe thinks he'll rid the world of it's sins.
But he'll feel the nails go right into his hands.Think about the first time that he came,
All the millions that died in his name,
The apocalypse is oh so near,
Soon enough we'll be in darkness.When the world finally got wise
He got a spear right into his side.