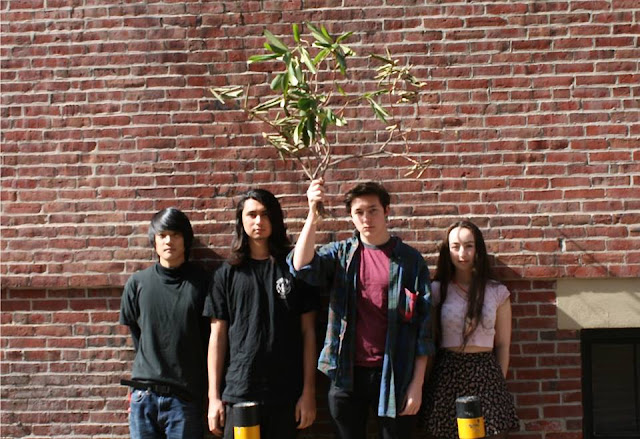 Yesterday, I noticed I had a message. It was from Olivia West and read thus;

"My name is Olivia and my band RiceCrackers recently released an EP. We would love to submit our EP, Kohole Kid, to be reviewed in the Just Some Punk Songs blog. Or if you don't want to review it, that's cool too.

We are an all-Asian female-fronted punk band from Boston, MA. We draw inspiration from grunge, ska and early punk. Formed in the sewers of Berklee College of Music. The RiceCrackers is a musical experience that was described by Thrash N' Bang as "confusing, intriguing and very good."

We will be on tour in the PNW this August."

And those are the sort of messages that send me into a panic. I started the blog during a Christmas break when I was bored and wondered if I could suss out how to do it. I just wanted to post some of my favourite songs and hope there would be others out there that would discover them. I don't really do reviews (they're just brief introductions to the band) as I'm not a good enough writer and who am I to tell anyone with far more talent that I possess that I think their labour of love sucks! That's why I worry when people send me stuff, if I don't like it do I post it anyway or do I try and squirm out of it. The fact that anyone wants me to write about their records still amazes (and humbles) me.

So back to Olivia's message. I clicked play and was confronted with something a little different to what I was expecting. A lone guitar ushered in an ethereal, floating female voice which was pretty eerie and haunting. Before too long though, things had speeded up somewhat and a feeling of anger began to dominate. Things were getting interesting. Then there were the backing ooo's before the singer started raging about the current fashion of people getting fucked up for fun..... Possibly not the best description of a song you've ever heard but hopefully good enough to tempt you to go and listen : http://berkleepunx.bandcamp.com/album/kolohe-kid

Anyway, to sum up, I'd describe it as eerie post punk. They (they being Olivia, Huxley, Yoshi and Andy) describe it as "Jangle Punk" "Hapa Grunge" and "Angry Fuzz" but whatever label you want to tag it with, it's inventive, fresh and deserving of your attention. The lead track from the EP, this is Mall Girls.....

*A good friend brought up some concerns to us about the “drinks getting laced” line being possibly interpreted as victim blaming. This refers to people getting fucked up for fun and thinking it is counter culture to do so. It is not referring to people spiking other’s drinks to sexually abuse them. This is not, in any way whatsoever, intended to be victim blaming.*