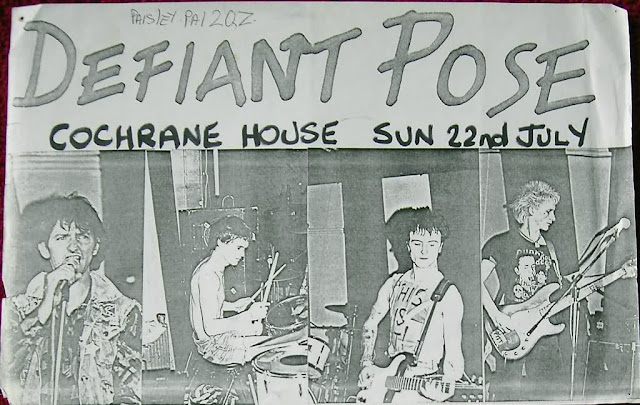 Might as well follow up two classic war themed tunes with a third, this time around from Paisley, Scotland, band Defiant Pose.

They formed in 1979 (possibly naming themselves after a single by The Cortinas?) and despite several line up changes, continued gigging until 1987. Never the most prolific of recording artists, they recorded a song called Fight for a 1981 split ep called Ha! Ha! Funny Polis (which also featured The Fegs, XS Discharge and Urban Enemies). Aside from that there was just a solitary double A-sided single, Someone Else's War/After The Bang. The line up for this single was Joe McGlynn (guitar/vocals), Crawfy (bass) and Callum Reid (drums).

During their lifespan they shared a stage with the likes of Killing Joke, Angelic Upstarts, The Chords and The Exploited but despite recording a 10 track demo no new music was forthcoming. There is however a tribute blog to Callum Reid (who tragically died in 2014) that contains that demo plus plenty of other unreleased tracks (including a version of The Subs' Gimme Gimme Your Heart) : http://callumreidrip.blogspot.co.uk/ .


A great song which is ripe for rediscovery, this is Someone Else's War.....