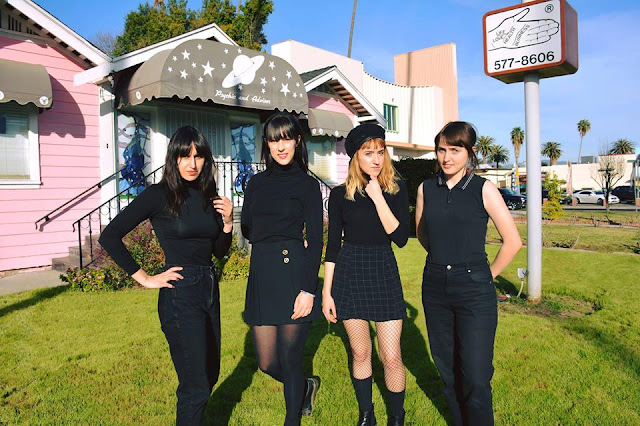 A few days ago I featured a song by Wild Animals and called it a perfect soundtrack for the summer. The same could easily be said for the new album from Peach Kelli Pop. When I featured a song from them on last week's Just Some Punk Songs show (https://www.mixcloud.com/mick-fletcher/just-some-punk-songs-200518/) I commented that they were probably too cute to be called punk but were far too catchy not to play. The song I played was Hello Kitty Knife and I was going to feature it on here but as there's a video for a different song I've decided to go with that. The album as a whole is full of catchy gems, it's titled Gentle Leader and you can check it out here :  https://peachkellipop.bandcamp.com/album/gentle-leader-2

Founded by Allie Hanlon and based in Los Angeles, Peach Kelli Pop are the aural equivilant of plunging a syringe full of sunshine into your vein. They might not be the listening choice of those of you who like their music to be hard hitting but for anyone who enjoys a good tune they're extremely moreish. They featured on here a few years back with a song that was "jangly, catchy as hell garage pop" (http://justsomepunksongs.blogspot.co.uk/2015/03/peach-kelli-pop-dreamphone.html) and Gentle Leader certainly won't disappoint any long term fans.

They've certainly cast a spell over me, I love them. This is Black Magic....