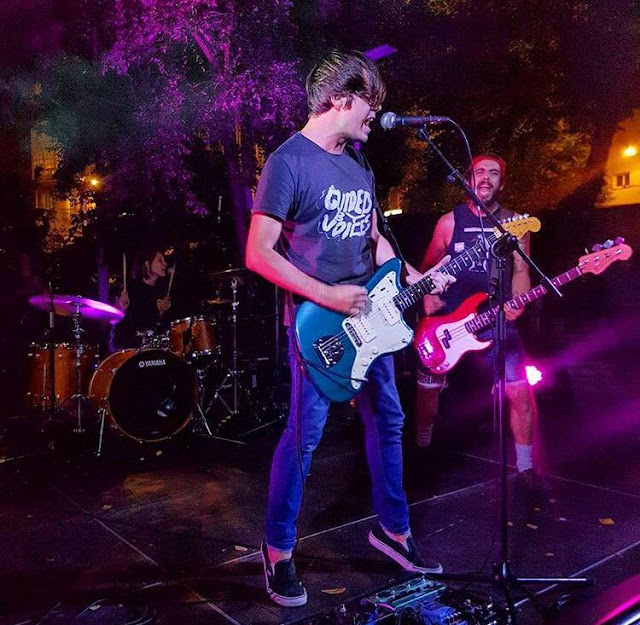 I tried my best to get a guest review for you today but I think all the people that said they would do one have been lying out in the sun topping up their tans (summer only usually lasts for a week in the UK so I can hardly blame them). This means you're stuck with me again but fear not, I've got a great song for you. It's by Wild Animals, they're from Madrid (a place where summer lasts for much longer than a week) and they're pretty damn awesome.

An easy tag to bestow upon them is power pop but they also incorporate elements of pop punk, indie, emo, rock etc so maybe I should just describe them as a catchy as fuck trio who's members are Jamie R Green (guitar/vocals), Paula Sanchez-Lafuente (drums/vocals) and Fon Alvarez (bass). They formed in 2014 and the following year released the First Songs ep. 2016 saw the release of debut album Basements : Music To Fight Hypocrisy (excellent opening track Sleepless Sundays was the song that brought them to my attention) and now they're back with new album The Hoax. Co-released by several labels worldwide (including Lauren Records and Waterslide Records) it's also available name your price on Bandcamp : https://wildanimalsmusic.bandcamp.com/album/the-hoax  You really need to snap it up.

The first verse of this song is a very decent opening but once Paula's vocals kick in and things go up a notch, the hairs on my arms stand up. It's that good. In fact it's a perfect summer soundtrack that those lazy sunbathers should have blasting out as they slowly cook. This is Interrupted Girl....