Revenge of the Psychotronic Man - Get Pissed, Talk Shit, Dance Like An Idiot 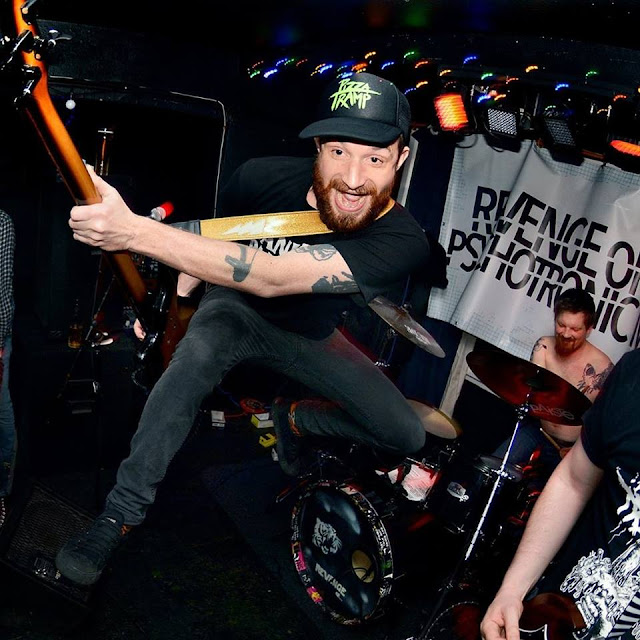 Yeah, I know pretty much all the songs I post on here nowadays are new or recent releases (which to me is the sign of a healthy punk scene) and I know the song you're getting today came out a good few years ago but it's a great song and so I'll use the excuse of it being re released as part of a greatest "hits" package as good enough reason to feature it today.

Most of you will probably know that Manchester hardcore punk heroes Revenge Of The Psychotronic Man are calling it a day at the end of the year. They formed in 2004 and over the last 14 years have given no less than 100%. But life moves on and rather than slow down they'd rather go out whilst still at the top of their game. Andy Davies (bass/vocals), Matt Woods (guitar/vocals) and Chris Hinsley (drums) will be bowing out (no doubt noisily) with a final gig, an all dayer in Manchester, in December alongside a host of other bands. You can get more details here :  https://www.facebook.com/RevengeofthePsychotronicMan/

To bid them farewell, and to highlight just how bloody good they are, TNS Records have released That Was Just A Noise (2004-2018). It features 26 tracks, mainly cherry picked from their back catalogue but there's also a few new ones. It's fast, it's loud, it's wonderful and it's here :  https://revengeofthepsychotronicman.bandcamp.com/album/that-was-just-a-noise-2004-2018

As well as digitally, it's also available on vinyl, cd and cassette :  https://www.tnsrecords.co.uk/just-noise-final-release-rotpm/

The song I'm posting today is one of their early ones. It was released in 2008 on the TNS compilation Vol 1 People Who Drink Cider In The Gutter (https://www.tnsrecords.co.uk/label-2/discography/tnsrecords-vol-1-music-by-people-who-drink-cider-in-the-gutter/).  It then resurfaced on the 10 Years Of Revenge 7" in 2014 (https://revengeofthepsychotronicman.bandcamp.com/album/10-years-of-revenge-7). Now it's back as the lead track on their swansong.

Email ThisBlogThis!Share to TwitterShare to FacebookShare to Pinterest
Labels: 2008, hardcore, punk, Revenge Of The Psychotronic Man