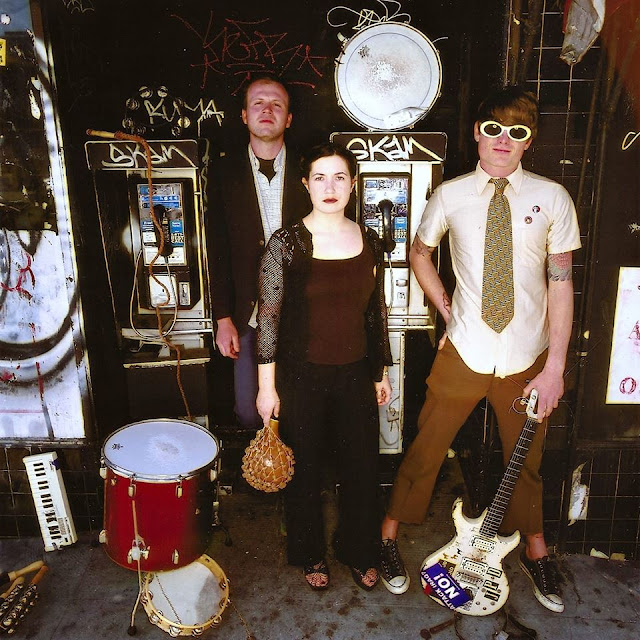 Coachwhips were a rambunctious garage punk band from San Francisco comprising John Dwyer (vocals/guitar), John Harlow (drums) and Ann McNamara (keyboards/backing vocals/tambourine). A later incarnation of the band saw Matt Hartman take over on drums and Val-Tronic on keyboards & tambourine. They formed in 2001 and split in 2005 (though there were reunion shows a few years ago). Dwyer is now frontman of Thee Oh Sees.

So why does today's update feature a song that first surfaced on a 2003 7" split with Trin Tran? Well, firstly because it's a damn good song (the purpose of this blog being to draw attention to damn good songs) and secondly because it's reappeared again on the reissue of Coachwhips' Night Train compilation. Comprised of outtakes, demos and other choice cuts, the album was originally released in 2017 but is now available in expanded form on the excellent Chicago label Girlsville....   https://girlsville.bandcamp.com/album/coachwhips-night-train-2

Girlsville's Courtney DelMar gives more details on the album in this article :  http://www.50thirdand3rd.com/john-dwyers-pre-oh-sees-band-coachwhips-ready-expanded-reissue-of-night-train-girlsville/

If 21 tracks of primitive garage/blues punk n roll sounds like your thing then this album would be an invaluable addition to your collection. It's the perfect antidote to the anodyne pap that far too often passes for modern music.

This song is called Hey Fanny....