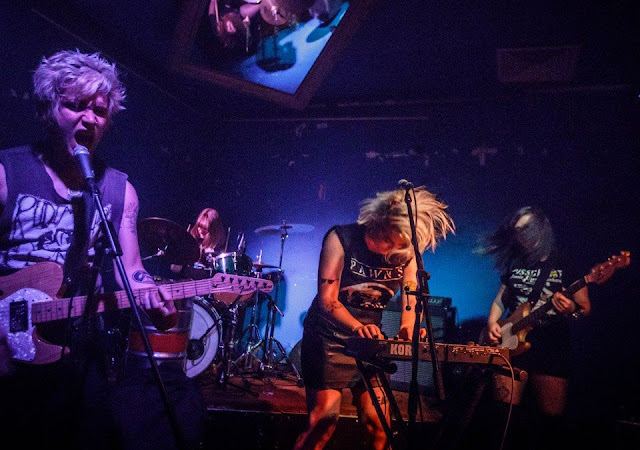 Formed in 2013 in Melbourne, Australia, Masses feature Nellie Pearson (vocals and synth, she's previously appeared on this blog with her other band, Ubik), James Blake (vocals/guitar), Tessa Tribe (bass and also a member of Ubik) and Ash Wyatt (drums). James and Tessa are also in a new band called Terremoto. Tagging themselves anarcho/post-punk/goth they combine politically motivated themes with darkly morose melodies. I can sometimes take or leave this kind of moody, atmospheric music but Masses have an urgency about them and are one of the bands that I can buy into.

Their back catalogue features a 2013 demo cassette, 2014's Horde Mentality ep, 2015's Masses/Death Church split ep and their debut 2016 album Moloch. They're back with a new S/T ep which is available via Lost In Fog Records (Australia) and Symphony Of Destruction Records (Europe). It's also available "name your price" on Bandcamp....  https://massesmelbourne.bandcamp.com/album/masses-2

They've plenty of gigs lined up in support of the ep including next month's European tour. You can check details here :  https://www.facebook.com/massesmelbourne/

The new ep is a definite winner that's been picking up plenty of well deserved positive comments. This is the lead track, it's called Worthy....