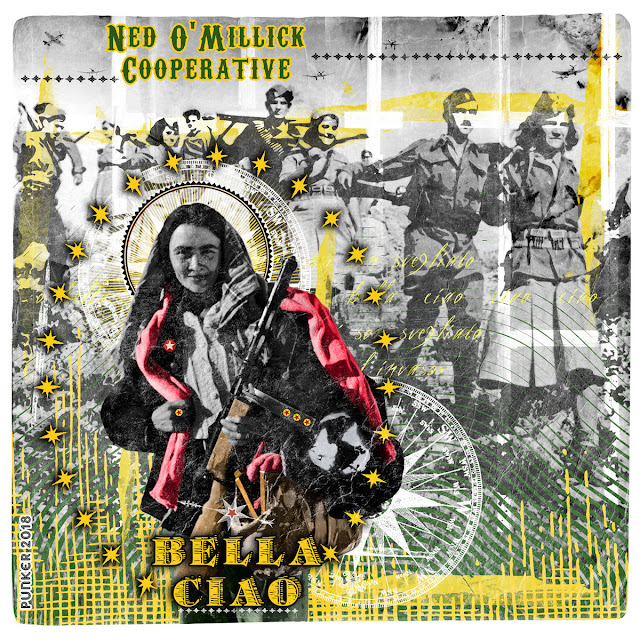 It's Friday so that means it's another guest review and today you're getting a song chosen by Barry Phillips. Barry was one time bassist with classic UK punk band Demob and is now a member of Hooligan Crooners (https://hooligancrooners.bandcamp.com/). He's recently spent time travelling in ex Yugoslavia researching material for an upcoming book he's writing called In Search Of Tito's Punks so watch out for that.

One of the friendships he's struck up whilst writing his book is with Ned O'Millick. From what Barry tells me, it's a tough life in that part of the world;

" I don't think we have much idea of the shit that folk in the Balkans are still going through.... Huge depopulation - from the countryside to the cities and from the cities to abroad. 50 Croats leave every day never to return. 25,000+ Croats in Ireland now.Similar for Serbia, although without the EU, so they have the worst of it all. Some EU countries - like Malta - allow non-EU citizens to be paid well below the national minimum wage. I have friends there working for 5 Euros an hour and having to pay accommodation out of that "


It's little wonder that Ned's music can sometimes be politically themed.

This is not one for the punk-fundamentalists. The Ned O’Millick Cooperative is a loose (different combinations of musicians for different tracks) global network of punk musicians ranging from the pretty famous (Mike Watt from Minutemen, Firehose etc is playing bass on one track) to the obscure and unknown (me). Ned O’Millick is a record producer, musician, songwriter and sound engineer who is the driving force behind the excellent ex-Yugoslavian punks Tito’s Bojs (check out their SCHPITZOCK! album) and also the ‘Za Tebe a tribute to KUD Idijoti’ (an extremely successful compilation album tribute to the legendary ex Yugo punks, featuring some of the finest punk and not-punk acts in ex-Yugoslavia).

This version of the Italian Partisan song ‘Bella Ciao’ – previously recorded by Chumbawumba, Dog Faced Hermans, one time Nick Cave muse/partner/bandmate Anita ‘Dirty’ Lane, KUD Idijoti, Goblini and many others – has a bass track which rumbles like the Sisters of Mercy live and yet features mariachi, traditional Italian folk guitar licks and…maybe it would be easier to use Ned’s description of “Crazy ethno/drum'n'bass/punk/dub”.  Vocals switch on each verse and feature Ned and Edi Maružin from the famous Istrian band Gustafi who have released numerous albums and toured the world – including with Manu Chao. Choruses are full-on, punk-mariachi-choir! This is the single version and is to be released on La Rockola vol 9 y 10 by famous latino underground rockers Che Sudaka (Cavernicola Records). A full album from the Ned O’Millick Cooperative, with a different version of Bella Ciao, is to be released within the next few months. The superb artwork here is by the great Mexican visual artist ‘Punker Ramirez’.

Ned hails not from the Emerald Isle but from the Balkans (Ned O’Millick is a corruption of his Slavic name) and describes himself as a “professional refugee since ‘92”. Ned is currently living and working in Munich but has roots in Croatian Istria.

This is Bella Ciao...