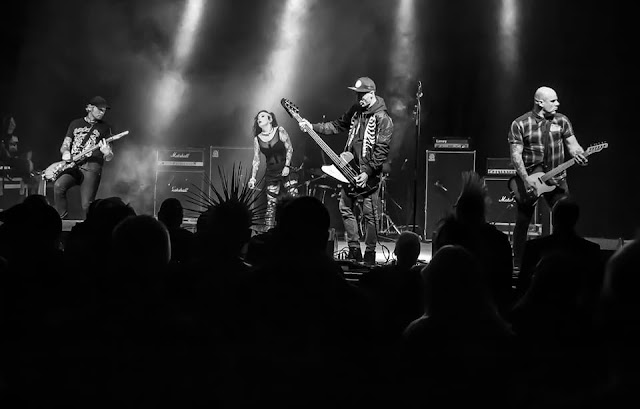 First up, a quick apology. If you're one of the lovely people that listens live to the Just Some Punk Songs show, you'll possibly know there was lots of love for the songs that featured from the chatroom folk.  If however you're one of the equally lovely people who catch up with the show when it gets saved to Mixcloud you may be wondering where it is. The reason it's not been uploaded yet is that from this week forward (till they realise I'm a crap dj or I sneak in too many songs with cunt in the title!) the shows will be broadcast by Radio Lantau ("Hong Kong's Number 1 Radio Station" http://radiolantau.com/). As far as I know, the show will air on a Thursday and repeat on a Sunday so it will go on Mixcloud after that). As today is Thursday, it's showday so if you want to listen to punk bands from places like Coventry, Scarborough, Whitehaven etc getting played to the residents of Hong Kong, click the link to Radio Lantau at 3pm UK time (in fact, tune in at 2pm as Wayne Elliott's excellent Pulsebeat show is on before (same excellent kind of punk tunes but with a much better dj). The 2 shows go out at 9pm and 10 pm Hong Kong time so will hopefully get new Uk (and other deserving bands from around the world) talent noticed by a wider audience.

And now the explanation for the absence of the show from Mixcloud is out of the way, here's the bit you've come for. Today's song.....

Possibly the song that went down the best on this week's show is from Coventry band dragSTER (I think i said on the show that they were from Blackpool, not sure where I got that from but I'll correct it here). Forming in 2004, they're a 5 piece featuring Fi Dragster (vocals), Diesel (rhythm guitar), Ben Kelly (lead guitar), Tom AK (bass) and Ryan Murphy (drums). They're about to release their 4th album (previously there's been Step Into The Deathray 2006, Here Come The Meat Robots 2010 and Dead Punk 2014.... You can find them here :   https://dragsteruk.bandcamp.com/).

The new album is called Anti-Everything and it'll be on Louder Than War records http://louderthanwar.com/shop/cd-albums/dragster-anti-everything-cd-edition/

There'll also be a full UK tour on the horizon and you can get details here :   https://www.facebook.com/dragSTERUK/
http://www.dragsteruk.com/


Dark and ferocious, this suggests the album will be a belter. It's called Damned.....