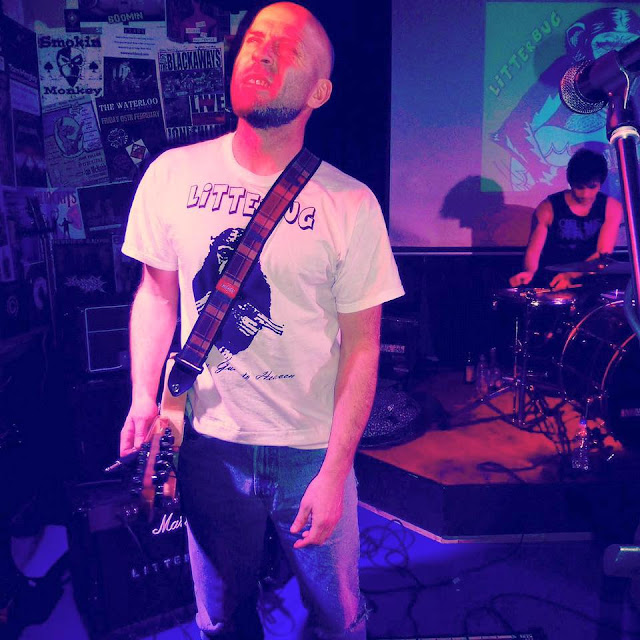 Another great Top 10 for you today courtesy of Litterbug guitarist/vocalist Stuart Diggle. You may have seen Litterbug feature on here a few days ago with a song from their highly rated new album, Countdown To Schadenfreude. Whilst chatting about his Top 10, Stuart told me this, "We probably released the 2nd album 6 months too early, as the last one came out in only June last year, but this was originally going to be an ep on vinyl only. We got carried away and I got impatient with release date as the last album has gotten very good reviews and responses so we tried to back it up to keep interest and allow new found followers to hear new songs and back track on some of our older stuff."

Not only does he select 10 cracking songs he also writes plenty of commentary to flesh out his selections "I always like geeky stuff like that..."

Cheers Stuart, over to you....

As regularly discussed with my mates, this track is the only song that can outshine some tracks on Never Mind the Bollocks. New Rose being the first punk record and somehow the greatest . The drum intro just literally kicks everything else into touch


As a young kid hearing this for the first time, it was like seeing that horror movie that disturbs you and will probably last a lifetime in the back of your mind. The intro sounds off kilter and awkward, akin to the shower scene in Psycho or the classic Jaws theme tune. When the violent feel accompanied by industrial language is unleashed, you knew something so out there was happening. It was like the epitome of everything that Punk once upset society with.


Simply because I have to pick one classic punk pop tune by them. It’s Alive transformed the Band as a live act, whilst the studio production often searched for the perfect radio friendly pop song. There are so many to choose from, but I love the drum start and rhyming tell ‘em with cerebellum is classic da Brudders stuff.


It would be easy to just stick with straight up punk rock labelled bands, but the dynamics on this track of the quiet loud genre they basically stumbled across and invented is at its peak with this track. The album Doolittle is possibly my fav all time record. The way the whole album ebbs and flows through the fast to slow and the wild to calm is all born out in Tame. So diverse in sound but definitively the Pixies. They are unique to this day and a shining example of being creatively leftfield whilst mastering the underground. A genius song writer that is Frank Black, Black Francis.


If there is nothing surprising about these old school classics, it’s because that’s exactly what they are. I could easily have opted for the B side Wasted Life, which I nearly did. SLF brought politics into their songs and also unified a city in the best possible and positive way. Through their art. Alternative Ulster is also a fantastic song with classic intro, if not over played. That’s probably why this track edges it, apart from the fact I remember my mum saying she loved the bass on Suspect Device's production. The Stranglers were her fav punk act by the way.

Just for the pure bloody cheek of Lydon coming up with something most wouldn’t have expected. The voice has changed as dramatically as the music, but Wobble's bass line alongside Levene’s stunt guitar sounds, just sounded alien to everything at the time. It probably wouldn’t have got beyond the garden gate if it wasn’t for the music press and business awaiting anything the new Mr Rotten could deliver, but thankfully it came through. Metal Box was a pretentious work of art.


They wrote brilliant pop songs filled with romantic failure that everyone could and still can relate too, but this is the track I always wait for a their live show, and sometimes don’t get. We totally ripped off the guitar intro riff for one of our songs, I Will Not Explain. Shameless plagiarism that i’m not going to apologise for.


For me, Killing Joke are the best live act from the old school bands. Still creating , still passionately meaning every word and the original line up too. Hypnotic live act. I was tempted to plump for a lighter sentimental track, like Love Like Blood or the more recent and brilliant track In Cythera, but this track summed up the bands tribal feel and sharing the lyrics between band Members was a winning idea.


I could have strayed into softer music , which I have penchant for, like Grandaddy, Eels or Weezer, or something from another culture perhaps, but it’s edginess and controlled anger in music that has influenced and disciplined me throughout life. This band appeared on the scene in 2005 I think. They had a few albums, but the debut, Everything Is, was a classic. This track, however, was from the second album. It’s fairly ferocious in its message and poignant in an age where corporates cash in on people’s misfortune or find other corrupt methods of beating a system “legally“ whilst hanging out the consumer to dry. Remember the day you could miss a train and jump in the next for free? Not now, you get punished even if it’s not your fault and it will cost you more when buy that second ticket. Or simply go back to the Day credit or debit card charges came in and added and inflated unnecessary postage costs for anything you bought. The flirting with false advertisement and basic rip off ventures in today’s society are far too saturated for anyone to take on the bigger guy. It’s fairly disgusting. I’ve gone off track there, but not really, if you listen to this song. I recommend listening to the first album Everything Is. Great lyrics from Sam Forrest. I could have gone for a Nirvana track, but their legacy doesn’t need to hitch a ride.


Got to go for at least one outsider / unknown band in the top 10. Cyanide Pills, from Leeds, have 3 albums and a plethora of power pop punk singles. They are possibly the best live act of the recent 21st century punk bands. They take their image from the Ramones and stage antics from Johnny Thunders. Some argue it’s choreographed, but it’s entertaining and whilst some acts are trapped in a shell on stage a little bit, like our good selves, it’s good to see a band using presentation as an important part of their performance. It does give them an edge. They have many good songs to choose from and I don’t mind admitting that Litterbug at times, aspire to reciprocate similar ideas tunes wise. You could select a brilliant 20 track album from their back catalogue, but I’ve opted for this more gentle track for its simplistic feel and fantastic backing vocals. I was close to picking Big Mistake, also from the 3rd album. They are great tunesmiths, plain and simple.