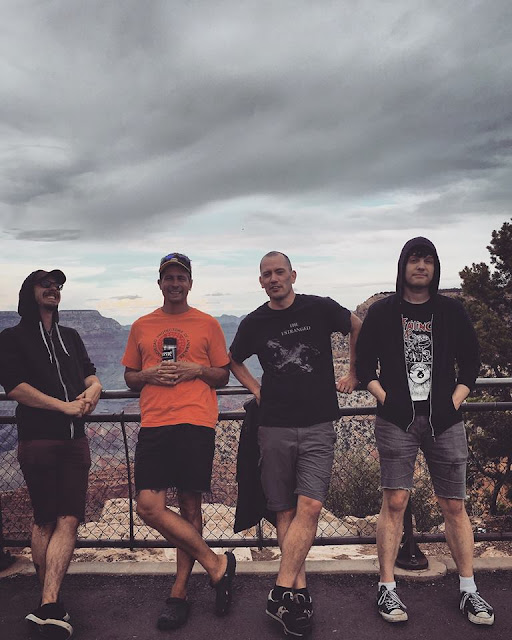 So, Portland. The largest city in Oregon. It sits on the Columbia and Willamette Rivers and is in the shadow of Mount Hood. And it's the only city in the world where every one of it's 639,863 residents are in a band!

One of those bands, Abolitionist, has just released their new album. It's their 4th and it's titled The Instant. Their previous albums have been It Used To Rain (2011), The Growing Disconnect (2013) and The Vicious Rumor (2015). Regular visitors to this blog may also remember I featured a song from their ep, The Pinnacle, which came out last year. All their releases are name your price on Bandcamp (donations appreciated but not necessary) and should be snapped up.  https://abolitionist.bandcamp.com/

The new album was released on May Day in the spirit of Workers Day and anti-capitalism in general. It features 12 taut tracks exploring an alternate reality where almost everyone in the world suddenly becomes touched by overwhelming empathy, though as Dustin sings, "we think we feel empathy, but underneath it's contempt."

Usually I post a video of the studio version of a song but as there aren't any yet on Youtube today you're getting something a little different (but still an excellent represention of the feel of the album). From the Bridge City Sessions, this is a fuck you to internet warriors everywhere, it's called Backlash....

We get the sense that it's already started. The small minority, freaks of fucking nature. Where's their compassion? Sense of empathy? Sitting on their asses, keyboard warriors. Backlash (fucking keyboard warriors). Backlash (freaks of fucking nature). Fuck you, we know what you're all about. We were just like you. Watch your backs ... soon will be the day when, hand in hand, we'll tear your houses down. Backlash (we'll tear your houses down). Backlash (hand in hand).