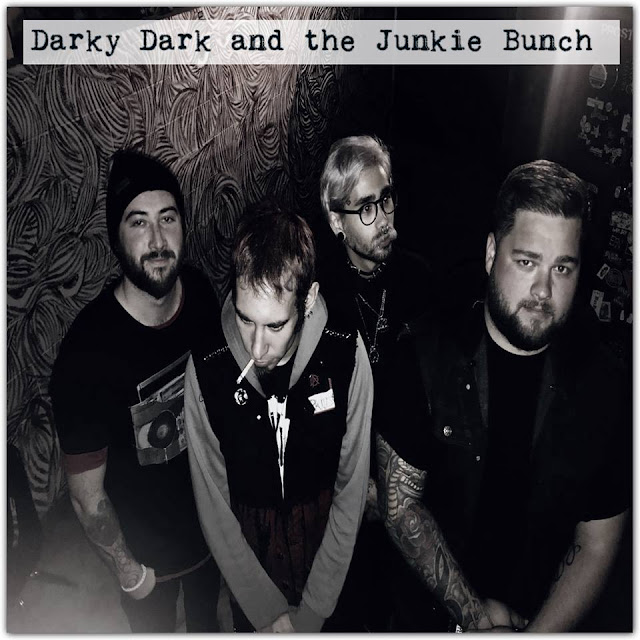 I was recommended the song I'm sharing today by Tokyo based dj Mike Rogers so many thanks to him for enriching my life with this tasteful tune! It's by a band from Costa Mesa, California, called Darky Dark And The Junkie Bunch. They describe themselves as "a modern day hardcore punk band for a fearful new world" and they list amongst their influences the likes of Days n Daze, NOFX, Leftover Crack, Pat The Bunny, Mischief Brew, Pennywise and GG Allin. Basically catchy punk rock tunes with a dash of folk and plenty of anarchy.

Their debut album, Experience, Strength And Dope was released in 2016, the ep Salting The Earth With Our Madness followed in 2017 and they recently returned with their 2nd album. It's titled 27 club, it features guest appearances by a bunch of local artists and it's pretty damn cool. Also damn cool is the fact it's name your price on Bandcamp....  https://darkydarkandthejunkiebunch.bandcamp.com/album/27-club

The song you'll find below has already been removed from Youtube at least once (I can't think why!) but it's back again and hopefully still will be by the time you read this. The tune is catchy as hell and the lyrics might well upset your nan (so sing along). This is The New American Love Song....

Email ThisBlogThis!Share to TwitterShare to FacebookShare to Pinterest
Labels: 2018, Darky Dark And The Junkie Bunch, punk