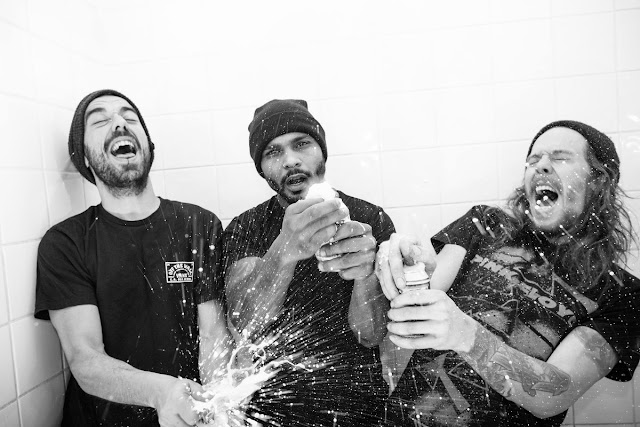 One of my favourite releases of 2018 so far is Target Earth, the excellent recent album by New Zealand kings of garage rock n roll The Cavemen. It's packed with primitive stompers that are both "batshit crazy" and very tuneful (https://slovenly.bandcamp.com/album/the-cavemen-nuke-earth-lp). The band that feature on today's update compare very favourably to them (which is as good a compliment as I can think of).

Hood Rats are from Montreal and they're bringing out a new album titled Trash Party. It's going to be on one of the year's most exciting labels, Girlsville (I recently featured their reissue of Coachwhip's Night Train album and they also released a couple of excllent demos and rarities comps by The Pristeens).

Described as a mixture of 80's hardcore and skate punk mixed with Motorhead's shredding and Rip Off Records' snottiness the album is truely wonderful. The band are a 3 piece featuring Tony Salador (drums/vocals), Troy Lockard (guitar) and JF Simoneau (bass) and boy do they kick up a racket. They're loud, fast and energetic. Their songs are short and catchy and the album will leave you panting, sweaty but baying for more. The cassette is due out on August 3rd (pre order now) but if that's too long to wait there's 10 tracks to check out on Bandcamp :  https://girlsville.bandcamp.com/album/hood-rats-trash-party

It didn't really matter which song I posted below, they're all great but I have to choose one so this is Hostile Takeover....

Hostile Takeover
With a bulldozer