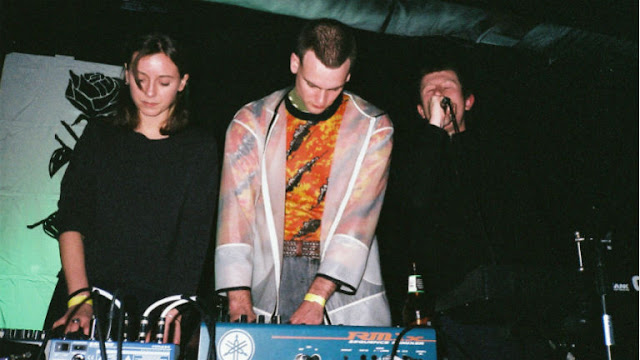 A song today from a Self Titled album that when I first came across it I wasn't at all sure about but which has definitely grown on me and is now a firm favourite. I played a song from it on the recent Just Some Punk Songs Drunken Sailor Records special and it stuck out like a sore thumb but went down extremely well with the folk in the chatroom (The show got as high as number 4 in a Mixcloud punk chart that often sees shows playing golden era oldies clogging up it's upper echelons so thanks to those that have checked it out  https://www.mixcloud.com/mick-fletcher/just-some-punk-songs-drunken-sailor-special/).

The song is by Sex Tourists, they're a "downer synth-pop" outfit from Sydney who's line up features members of bands such as Aloha Units, Natalia And Her Naptime and Houseband and they appear to have been influenced far more by early New Order and Vietnamese funeral music! than by any of the usual likely suspects. That line up is Darius Ottignon, Ewan Finlay and Nicola Babbage.

The album was originally released last November by local diy label Paradise Daily Records but was quickly picked up by that bastion of good taste Juice who quickly added it to the impressive roster on his Drunken Sailor label. There were a limited number of copies available on vinyl and it's also here digitally :  https://drunkensailorrecords.bandcamp.com/album/st-lp-3

You may also be interested in the "name your price" demo that came out 3 years ago on the band's own Trackside Records :  https://tracksiderecords.bandcamp.com/album/sex-tourists-demo

If, after your first listen to Sex Tourists, you're like me and aren't sure, don't give up. They'll soon drill through that initial resistance and firmly implant their nagging earworms inside your head. If, like Juice and the majority of the JSPS chatroom you fall in love straight away then make sure you snap up the album. Damn this is good, it's called Guts....