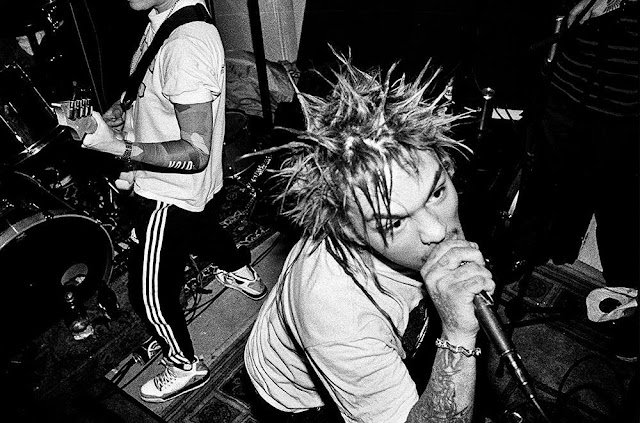 Skunk is from Oslo and is vocalist with hardcore punk band Negativ (https://negativ1010.bandcamp.com/). He also runs the Byllepest Distro and label  (https://byllepestdistroofficial.bandcamp.com/) and Barrikaden Booking.

I'd like to thank him for taking time out from from organising September's Barrikadenfest (https://www.facebook.com/events/453730678316502/) in order to share a Top 10 of some of his favourite Scandanavian punk songs. As with the best of these lists, he's gone above and beyond the call of duty and added commentry to his selections.....

"these are not necessarily my top 10 but just 10 songs / bands I think everyone should hear. Killer yet not so known songs from Scandanavia that people might not have heard. I avoided classics like Svart Framtid, Mob 47, Amdi Pedersens Arme etc and went for more underground shit....."


As most of the more recognized bands from Norway, a big part of what makes BARN AV REGNBUEN stick out was their technicality. But unlike a lot of Oslo bands that kind of played like Black Sabbath on speed; Barn av Regnbuen played really, really, really fucking fast music with great drives. Bands like SO MUCH HATE and STENGTE DØRER took me way longer to get into when I was a kid due to all the bluesy stuff but Barn av Regnbuen carved the way and can be held in comparison when it comes to tempo and percussion as great italian bands like CHAIN REACTION and early WRETCHED. I like really fast and snotty hardcore, and BARN AV REGNBUEN is the best fast and snotty band you will find from Norway. Tom and Roger from Barn av Regnbuen now play in DANGER!MAN. This is their second EP which was only pressed on flexi discs, the first one from 1986 is good, but slower and more melodic.

I like bands that write songs. I'm superstoked to have worked with PURPLE X over the past few months on producing the most characteristic tape EP to come out of this isolated shitty valley of disgusting mountains. Where groovy meets mysterious and fucked up. With broken guitarlicks bouncing off some of the craziest drums I've heard in a long time and songs about molested children and the metaphysical destruction of order and everything. Stealing from older favorites like POST REGIMENT and newqwturntable returners like NANDAS. It's gonna be out on tape soon and I'm really excited about it, if there were two more songs on this it would've been worthy a MLP format. The thunderstrikes or «riffs» hanging over the first part of the first verse gives me shivers.

Bands from smaller cities have taken shit from bands from bigger cities for generations. SISTE DAGERS HELVETE from Moss never went outside of Norway and only appeared on a few international compilations. It didn't help them much that they ended up featured on the dodgy german nazi-promoting label; ROCK-O-RAMA. They had a reunion in 2007 along with releasing their discography on record. I like bands from Moss, Tønsberg and Horten because they often have a bit of melody in all the rawness. There are some gems among those bands, other ones worth checking out are KORT PROSESS, KONSTANT ANFALL and TVANG.

The title says it all I guess. Allthough Finland is not really part Scandinavia, it's still so far north that nobody gives a shit except people in Finland. Drew Owen from SICK THOUGHT; DD OWEN, etc moved to Helsinki and gathered a posse of losers to write destructive KBD punk. I remember seeing them in Stockholm at Gula Villan while on tour with SIEVEHEAD and the band members were threatening each other with being beaten up by a snare droom; «Just like in the cartoons». I hope they manage to not do that for long enough so that Baby's Blood can release a vinyl.

JUNTA is the best band to ever arise from Denmark since fucking AMDI PEDERSENS ARME, and I am ready to fight any GORILLA ANGREB (including the band) and PARAGRAF 119 wannabes out there about this and I will probably lose. After releasing a handful of EP's on tape and vinyl, I think everyone who followed JUNTA in their progress could already tell «Vertigem» that came out earlier this year was gonna be something else. With golden letters on black cardboard and the logo more defined than ever, this is perhaps their definitive 7" EP so far. Junta plays hardcore punk in the veins of half the bands on the P.E.A.C.E/W.A.R compiilation and kicks everything's dirty asshole in 2017. Junta is great and sing in portugese and danish about war, horrors and the importance of struggle.

Eternal classic of swedish punk and it inspired my favorite current japanese band; SKIZOPHRENIA a lot.

Snottiest scum from Sweden at the moment in my opinion. If anyone caught the HEAVY MAKE-UP demo that came out some years ago, this is the same guys! As evil as it is immortally adolescent, LÖSS is here to stay with no interest in your fake scene bullshit. They deliver primitive, rabid punk for losers and you should get out of their way right now. They did a tour recently in scandi-hell with LUBRICANT and CUNTROACHES.

Supercool track from the newest LP from Oslo's best melodic punk band; MODERN LOVE. The new LP is out on Refuse Records. Catch them on tour. They're the first band in a while to be this innovative with songwriting in Norwegian. I didn't like the previous record that much but the new record has more some more conventional songwriting that's easier for me to get around I guess, haha!

Killer garage-punk from Norway from 1981. They were on Killed by Death 40 or something I think... The song is about punks bullying stupid student kids and then the stupid student kids form a band and sing about it; those kids were probably FORT & GÆLI (Fast and bad)....