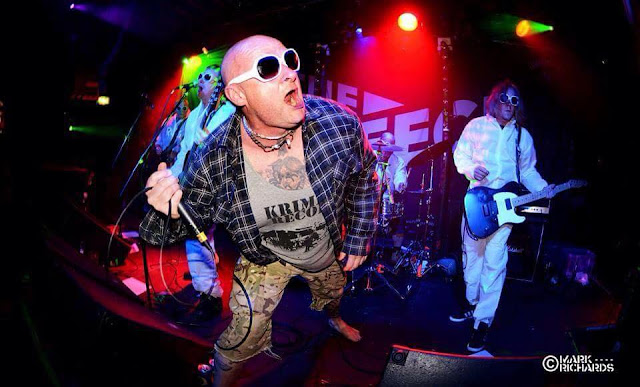 
Bad Sam are from Newport, Wales. They have a number of interests in life such as spaghetti westerns, Elvis, skulls, drugs, booze, kung fu, action man toys and screen printing. More relevantly for this blog, they also enjoy making a noise. A great big noise!

They describe themselves as "five fucks screaming and yelling, playing shit with left wing social and personal shit." Those five fucks are Dean Beddis (vocals), The Glove (guitar), Ricky D (drums), Lanny C (guitar) and Rhystepher (bass). They've previously graced far too many bands to mention without boring the shit out of you but the list includes Cowboy Killers, Dub War, Da Capo and Four Letter Word.

They self released the Newport Hotel album in 2010 and followed it up a few years later with Working Class Holocaust (https://badsam.bandcamp.com/album/working-class-holocaust). Now they're back kicking and screaming with the explosive new album Bring Me The Head Of... It was released a couple of months back on their own Kriminal Records label and is a must have for fans of aggressive hardcore punk.

I played a song from the album on the latest Just Some Punk Songs show and it went down a treat with the chatroom folk (the show is saved here if anyone wants to listen to an hour of killer new punk tunes :  https://www.mixcloud.com/mick-fletcher/just-some-punk-songs-160717/). I'm sure the song I've posted below will go down equally as well.

Do the best you can, make a living and keep the wolf from your door. This is 3 Little Pigs.....